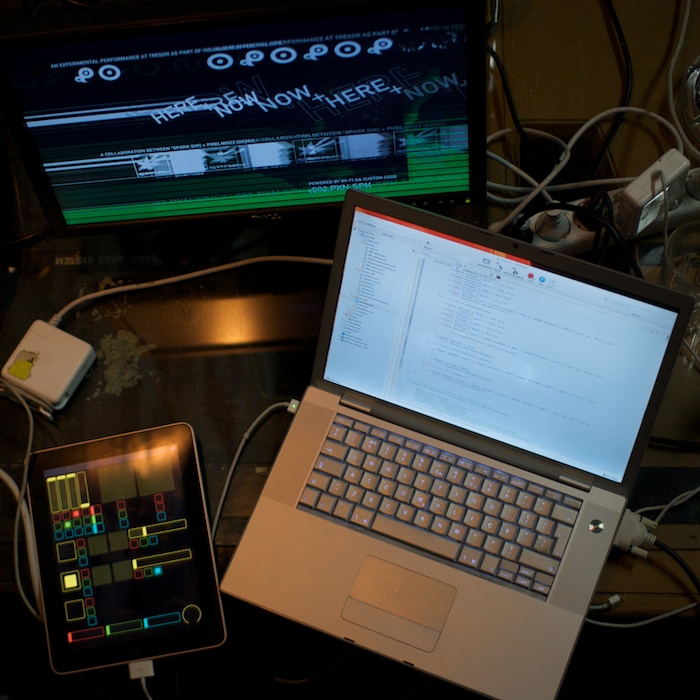 tresor backstage, 1am, get to the final compile of here+now for the 3am performance. there is never enough time in this world, and for experimental projects on the side doubly so. the dream of just hanging out at a festival… 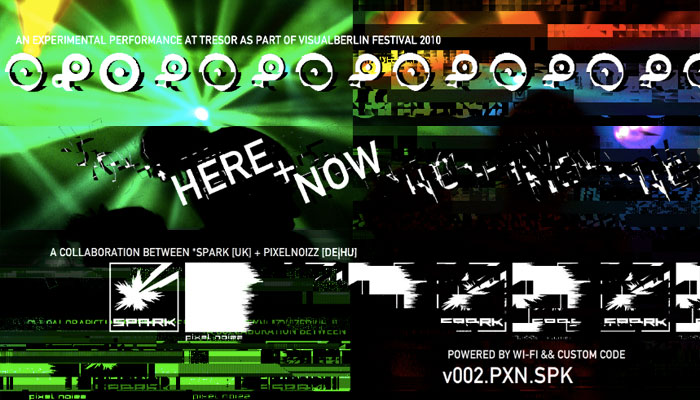 pixelnoizz, *spark, an empty media card and a glitch machine: when its here+now, you’ll be part of it. an experimental performance workshopped as part of visualberlin festival 2010.

tomorrow week, i’ll be in berlin crossing my fingers for a performance based on only semi-tested technology and a lot of custom development that will happen once i’m over there. collaborating with david aka pixelnoizz, who so impressed me with his performance serpendity at lpm last year, and has since gone on to develop a whole suite of quartz composer based glitch stuff. which is just what a project based on a stream of photographs coming in from a camera roving around the venue needs. its also a collaboration-in-absentia with vade, as his v002 plugins are a big part of this, and he was there at lpm where the spirit of collaborations took hold amongst our group. and if he could, i’d wager he’d be over doing this with us in a flash.

there’s also an interesting aside in that the poster image for this was created by quickly knocking something up in quartz composer, and pressing the ‘re-glitch’ buttons until a nice combination popped out. so really, rather than having the static image, that composition should be the poster, quietly evolving by itself, glitching through the embedded images and whatever it finds in the graphics memory of everybody’s individual machines. not that that would be a ‘safe’ composition that would be allowed to play in a osx browser, but hey.