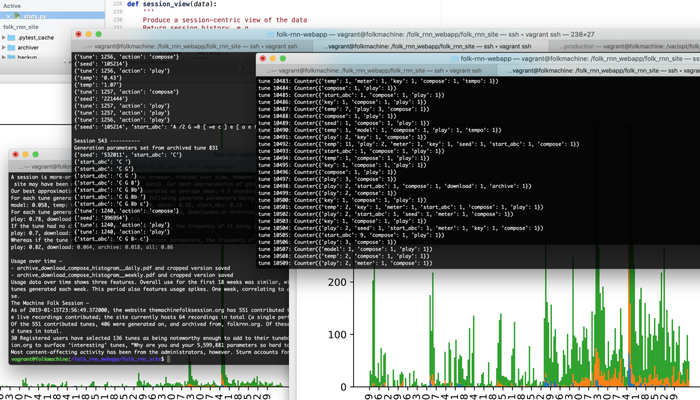 for any given tune, how much activity surrounded it?
for any given session, what happened?
what are the usage trends of folkrnn.org and of themachinefolksession.org?

to answer these kinds of questions, enter stats, a django management command for processing the use data of composer and archiver apps for insight / write-up in academic papers.

i used this to write the following, with input from bob and oded. it will surely be edited further for publication, but this is as it stands right now.

During the first 235 days of activity at folkrnn.org, 24562 tunes were generated by – our heuristics suggest – 5700 users. Activity for the first 18 weeks averages a median of 155 tunes weekly. In the subsequent 15 weeks to the time of writing, overall use increased, with a median of 665 tunes generated weekly. This period also features usage spikes. One week, correlating to an interview in Swedish media, shows 2.7x the median tunes generated. The largest, correlating to a mention in German media, shows an 18.4x increase. These results show making our tool available to users of the web has translated into actual use, and that use is increasing. Further, media attention brings increased use, and this use is similarly engaged, judged by similar patterns of downloading MIDI and archiving tunes to themachinefolksession.org.

Of the fields available for users to influence the generation process on folkrnn.org, the temperature was used more often then the others (key, meter, initial ABC, and random seed). Perhaps this is because changing temperature results in more obviously dramatic changes in the generated material. Increasing the temperature from 1 to 2 will often yield tunes that do not sound traditional at all. If changes were made to the generate parameters, the frequency of the resulting tune being played, downloaded or archived increased from 0.78 to 0.87.

Over the same period since launch, themachinefolksession.org has seen tunes 551 contributed. Of these tunes, 82 have had further iterations contributed in the form of ‘settings’; the site currently hosts 92 settings in total. 69 tunes have live recordings contributed; the site currently hosts 64 recordings in total (a single performance may encompass many tunes). These results show around 100 concrete examples of machine-human co-creation have been documented.

Of the 551 contributed tunes, 406 were generated on, and archived from, folkrnn.org. Of these entirely machine-generated tunes, 32 have had human edits contributed; themachinefolksession.org currently hosts 37 settings of folkrnn generated tunes in total. These examples in particular attributable human iteration of, or inspiration by, machine produced scores.

Further value of machine produced scores can be seen by the 30 registered users who have selected 136 tunes or settings as being noteworthy enough to add to their tunebooks. Per the algorithm used by the home page of themachinefolksession.org to surface ‘interesting’ tunes, “Why are you and your 5,599,881 parameters so hard to understand?” is the most, with 4 settings and 5 recordings.

While these results are encouraging, most content-affecting activity on themachinefolksession.org has been from the administrators; co-author Sturm accounts for 70% of such activity. To motivate the use of the websites, we are experimenting with e.g. ‘tune of the month’, see above, and have organised a composition competition.

The composition competition was open to everyone but targeted primarily at music students. Submission included both a score for a set ensemble and an accompanying text describing how the composer used a folkrnn model in the composition of the piece. The judging panel - the first author was joined by Profs. Elaine Chew and Sageev Oore - considered the musical quality of the piece as well as the creative use of the model. The winning piece Gwyl Werin by Derri Lewis was performed by the New Music Players at a concert organised in partnership with the 2018 O’Reilly AI Conference in London. Lewis said he didn’t want to be ‘too picky’ about the tunes, rather he selected a tune to work from after only a few trails. He describes using the tune as a tone row and generating both harmonic, melodic and motivic material out of it. Though the tune itself, as generated by the system, does not appear directly in the piece.