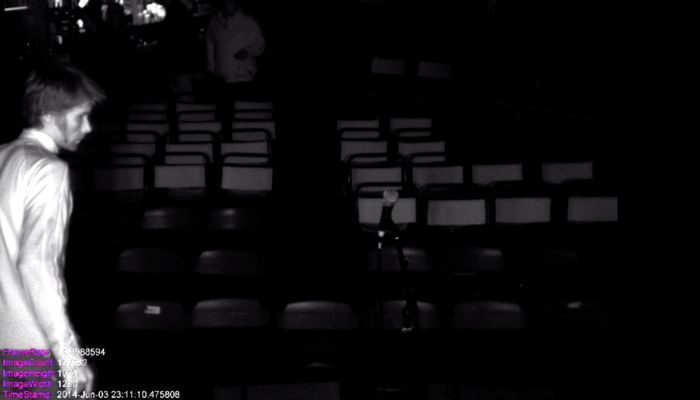 the second gig of our tour investigating robo-standup in front of ‘real’ audiences: gits and shiggles at the half moon, putney. a regular night there, we were booked amongst established comedians for their third birthday special. was very happy to see the headline act was katherine ryan, whose attitude gets me every time.

shown previously was artie on-stage being introduced. he (it, really) has to be on stage throughout, so we needed to cover him up for a surprise reveal. aside from the many serious set-up issues, i’m pleased i managed to fashion the ‘?’ in a spare moment. to my eye, makes the difference.

artie has to be on stage throughout as we need to position him precisely in advance. that, and he can’t walk. the precise positioning is because we need to be able to point and gesture at audience members: short of having a full kinematic model of artie and the three dimensional position of each audience member identified, we manually set the articulations required to point and look at every audience seat within view, while noting where each audience seat appears in the computer vision’s view. the view is actually a superpower we grant to artie, the ability to have see from way above his head, and do that in the dark. we position a small near-infrared gig-e vision camera in the venue’s rigging along with a pair of discreet infra-red floodlights. this view is shown above, a frame grabbed during setup that has hung around since.