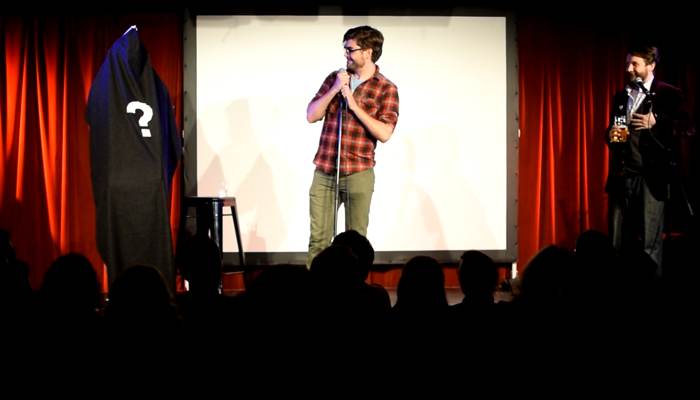 getting a robot to perform stand-up comedy was a great thing. we were also proud that we could stage the gig at the barbican arts centre. prestigious, yes, but also giving some credibility to it being a “real gig”, rather than an experiment in a lab.

however, it wasn’t as representative of a comedy gig as we’d hoped. while our ‘robot stand-up at the barbican’ promotion did recruit a viably sized audience (huzzah!), the (human) comics said it was a really weird crowd. in short, we got journalists and robo-fetishists, not comedy club punters. which on reflection is not so surprising. but how to fix?

we needed ‘real’ audiences at ‘real’ gigs, without any recruitment prejudiced by there being a robot in the line-up. we needed to go to established comedy nights and be a surprise guest. thanks to oxford brookes university’s kind loan, we were able to load up artie with our software and take him on a three day tour of london comedy clubs.

and so, the first gig: the alternative comedy memorial society at soho theatre. a comedian’s comedy club, we were told; a knowledgeable audience expecting acts to be pushing the form. well, fair to say we’re doing something like that.