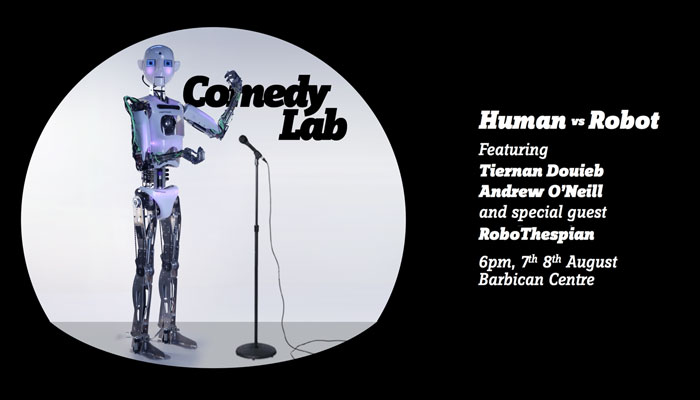 Come and see some more stand-up comedy, in the name of science – and this time, there’s a robot headlining!

What makes a good performance? By pitting stand-up comics Tiernan Douieb and Andrew O’Neill against a life size robot in a battle for laughs, researchers at Queen Mary, University of London hope to find out more — and are inviting you along.
A collaboration between the labs of Queen Mary’s Cognitive Science Research Group, RoboThespian’s creators Engineered Arts, and the open-access spaces of Hack The Barbican, the researchers are staging a stand-up gig where the headline act is a robot as a live experiment into performer-audience interaction.
This research is part of work on audience interaction being pioneered by the Cognitive Science Group. It is looking at the ways in which performers and audiences interact with each other and how this affects the experience of ‘liveness’. The experiment with Robothespian is testing ideas about how comedians deliver their material to maximize comic effect.

Poster attached. Aside from the science, the designer in me is quite content with how that little task turned out.