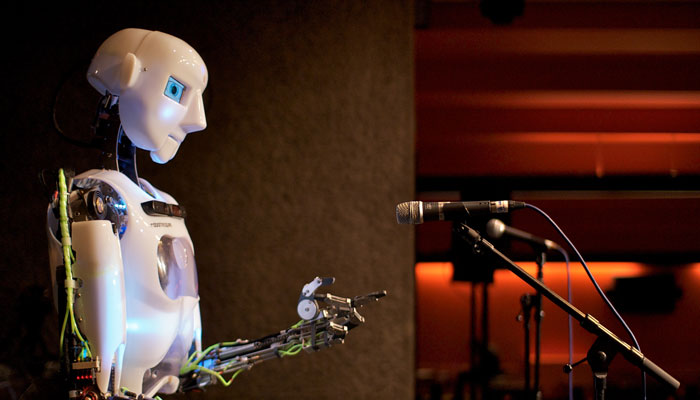 “I never know how to start, which is probably because I run off windows 8” – and there were more laughs than groans!

as part of the media and arts technology phd you spend six months embedded somewhere interesting, working on something interesting. i did a deep dive into web adaptations and the semantic mark-up of stories at the bbc. klemomenis katevas has spent five months at engineered arts working on realtime interaction with their robothespian, and what better test could be a re-staging of comedy lab.

beyond tiernan’s script and kleomenis’s programming of the robot, what was most exciting was to see a robot did colombine gardair’s ‘woooo’ gesture, and the audience responded exactly as they do in covent garden. that’s our first trying out of something we’ve learnt about performance from doing this line of research… and it worked.

robothespian’s first gig was straight delivery of the script and ‘press play’ stagecraft. it went surprisingly well - it really did get laughs and carried the audience to a fair degree. tomorrow, we turn on the interactivity…