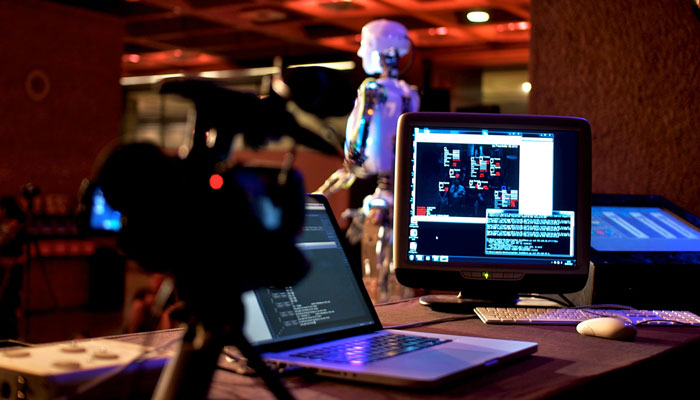 getting a robot to tell jokes is no simple feat. programming and polishing a script for the robot to deliver is challenge enough, but trying to get that delivery to be responsive to the audience, to incorporate stagecraft that isn’t simply a linear recording… now that is hard. of course, in the research world, we like hard, so reading the audience and tailoring the delivery appropriate to that is exactly what we set out to do.

having robothespian deliver what was essentially a linear script for his first night performance, for his second performance we turned on the interactivity. we had a camera and microphone giving us an audio-visual feed of the audience, and processed this to give us information to make decisions about robothespian’s delivery. a simple example is waiting until any audience audio – laughing, you hope – dies down before proceeding to the next section of the routine. more interesting to us is what having an humanoid robot allows us to do, as eye contact, body orientation, gesture and so on form so much of co-present human-human interaction. for that you need more than a single audio feed measuring the audience as a whole, you need to know exactly where people are and what they’re doing. in the photo you can see our first iteration of solving this, using the amazingly robust fraunhofer SHORE software, which detects faces and provides a number of metrics for each recognised face, such as male/female, eyes open/closed, and most usefully for instrumenting a comedy gig: a happiness score, which is effectively a smileometer. from this, robothespian delivered specific parts of the routine to the audience member judged most receptive at that point, was able to interject encouragement and admonitions, gestured scanning across the audience, and so on.

research being hard, it seems turning the interacion on backfired, as the gross effect was to slow down the delivery, taking too long between jokes. but this is a learning process, and tweaking those parameters is something we’ll be working on. and – big point i’ve learnt about research, you often learn more when things go wrong, or by deliberately breaking things, than when things work or go as expected. so there’ll be lots to pore over in the recordings here, comparing performer-audience-audience interaction between human and robot.