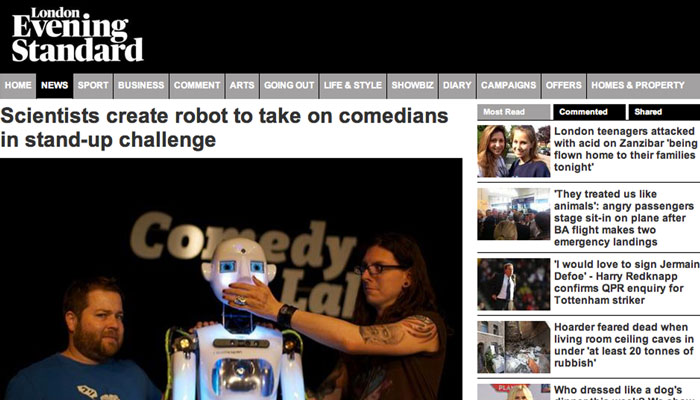 nice article in the london evening standard on comedy lab, link below and photo of it in the paper attached:
http://www.standard.co.uk/news/london/scientists-create-robot-to-take-on-comedians-in-standup-challenge-8753779.html

here’s the q & a behind the article, our answers channeled by pat healey

What does using robots tell us about the science behind stand-up comedy?
Using robots allows us to experiment with the gestures, movements and expressions that stand-up comedians use and test their effects on audience responses.

What’s the aim of the experiment? Is it to design more sophisticated robots and replace humans?
We want to understand what makes live performance exciting, how performers ‘work’ an audience; the delivery vs. the content.

Is this the first time an experiment of this kind has been carried out? How long is the research project?
Robot comedy is an emerging genre. Our performance experiment is the first to focus on how comedians work their audiences.

Tell me more about RoboThespian. Does he just say the comedy script or is he (and how) more sophisticated? Does he walk around the stage/make hand movements/laugh etc?
This research is really about what’s not in the script - we’re looking at the performance; the gestures, gaze, movement and responsiveness that make live comedy so much more than reading out jokes.

How does his software work?
We use computer vision and audio processing to detect how each person in the audience is responding. The robot uses this to tailor who it talks to and how it delivers each joke - making each performance unique.

What have you learned already from the show? Does the robot get more laughs? Does he get heckled? What has been the feedback from the audience afterwards?
I think Robothespian had a great opening night.

Do you see robots performing stand-up in future?
It will take some time to emerge but yes, I think this will come. Interactive technology is used increasingly in all forms of live performance.