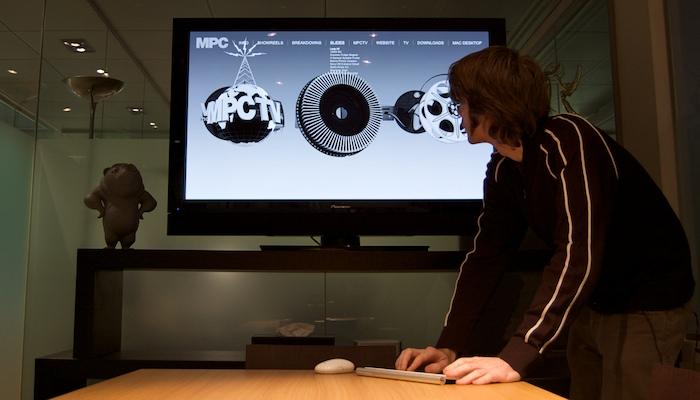 I created ‘MPC Screen’, a touch-point of client and staff interaction at the Moving Picture Company. A Mac Mini based appliance driving 60” plasma screens, its slick interface and networked features became ubiquitous throughout one of Europe’s largest production houses.

MPC were renovating their meeting rooms, and the ever-growing pile of devices in the corner was increasinly incongruous for a facility marching fast towards a wholly digital pipeline. It was quite a ragtag selection - dvd players, tape decks, matrix selectors, amplifiers, a PC for the internet - each of which gave a table a different remote control and myriad of patched cables to be stabbed at or pulled out by a well-meaning producer in a moment of urgency. The lead engineer at MPC had decided that the centrepiece of the remodelled meeting rooms would be a 1080P plasma screen, on which he wanted something that would be guaranteed to be up, working, and available whenever a meeting was called or a client would walk up to one. After a lunchtime discussion involving Mac-like usability and one-interface-to-rule-them-all the ‘MPC Screen’ project was born.

The brief was for one system setup that performed two main roles: a branded environment giving access to all MPC promotional media such as showreels and their client and public facing websites, and a locked-down desktop mode for use as a computer in meetings. After three weeks work a proof-of-concept machine was live and in front of clients, and the buy-in was massive: “it sells MPC without us selling ourselves”. Through my creative work and system design, they had something far more elegant and sophisticated than they had imagined. The budget was released to flesh out the functionality, integrate it into their whole back-end, and put some real spit-and-polish into the experience.

The finished MPC Screen is a system in three parts, wholly developed by myself.

1 - MPC Screen, the application
This is the heart of the experience. A full-screen application that presents a seamless world of MPC created content suitable for presenting to clients. It can show 1080P films, image slideshows, live webpages, navigable PDFs, and even television. It will time-out into a custom screensaver; as delivered a slowly shifting colour pallette throughout the building as the MPC newsfeed drifts past. The text and content of its menu structure is set by an easily updatable XML file, and media files can be brought into it immediately simply by dropping them into a watch-folder. Behind the scenes, it uses Quartz Composer for the dynamic interface and screensaver, meaning I was able to rapidly prototype interface designs and collaborate fluidly with MPC’s in-house creatives who now can tweak or wholly redesign the look of MPC Screen. That, and it does whatever it took to get 1080P playback on that generation of hardware, along with seamless switching between OpenGL, NSWindows and different user accounts.

2 - MPC Desktop Buttons
The last option in MPC Screen is for when a full-screen interface isn’t what you want: e.g. you want a cinesync session or to use iChat, somebody comes in with a usb stick and has to go hunting around on it for something obscure, or you want ten firefox pages open with plugin-x. The trick to MPC Screen was to make it do the core of client-facing things really well, and in there give the option to transition that screen into a normal computer. So you can switch to a managed, locked down ‘Mac Desktop’, where everything is as a producer would expect with the bonus of a row of carefully selected big application icons and folders arranged across the desktop. You want iChat? There it is. You’ve just downloaded something from the internet to show in the meeting you’re just about to have? Drop in MPC Screen’s downloads folder. Perhaps most importantly, the application behind this - MPC Desktop Buttons - also contains an idle timer, so when left alone the plasma screen will first default back to the full-screen interface, and then the custom screensaver.

3 - System administration
These two applications are the centrepiece of a Mac OSX build that gives the two modes their appropriate user spaces, and interfaces correctly with the wider MPC network. Using a system called Radmind this build is managed centrally, with the deployed machines correcting any modifications made by users and pulling any updates from the central server as necessary. So the machines are always in a known-good state, files left on the desktop are cleared overnight, and this same mechanism is used to update the content and menu structure as a shell-scripted extension of MPC’s existing pipeline. 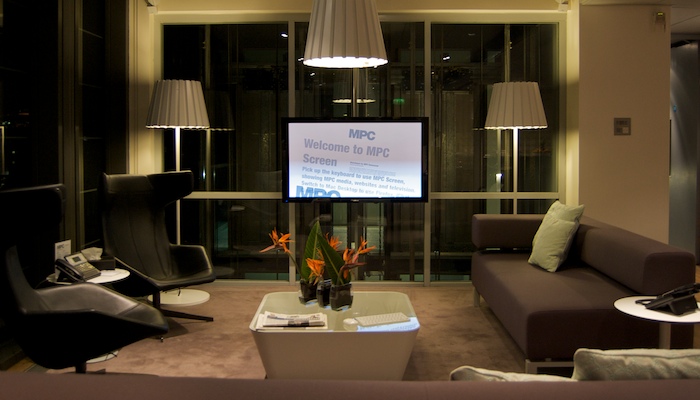 and here’s another, in a slightly less formal environment. suffice to say, the tv feature is used a lot more here! 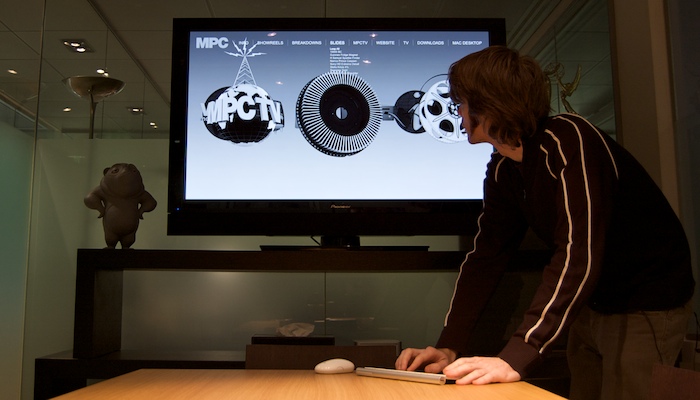 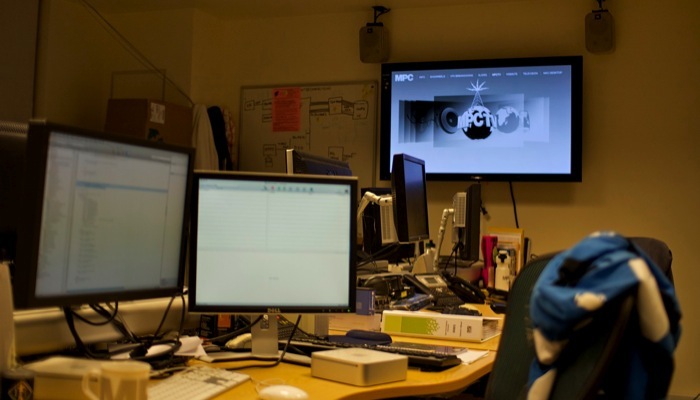 it might not be the most exciting photo, but this desk has seen three weeks coding a big project for a soho production house. “would you like to make something akin to “front row” to aggregate the content and services at this facility, to fit on all the 50” plasmas we’re about to get in the building?” “yes please.”