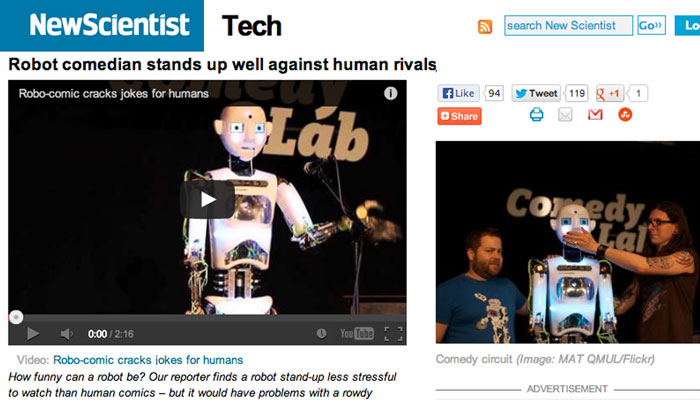 “Hello, weak-skinned pathetic perishable humans!” begins the stand-up comic. “I am here with the intent of making you laugh.”
A curiously direct beginning for most comics, but not for Robothespian. This humanoid robot, made by British company Engineered Arts, has the size and basic form of a tall, athletic man but is very obviously a machine: its glossy white face and torso taper into a wiry waist and legs, its eyes are square video screens and its cheeks glow with artificial light.
Robothespian’s first joke plays on its mechanical nature and goes down a storm with the audience at the Barbican Centre in London. “I never really know how to start,” it says in a robotic male voice. “Which is probably because I run off Windows 8.”
The performance last week was the brainchild of Pat Healey and Kleomenis Katevas at Queen Mary University of London, who meant it not only to entertain but also to investigate what makes live events compelling.
As we watched, cameras tracked our facial expressions, gaze and head movements. The researchers will use this information to quantify our reactions to Robothespian’s performance and to compare them with our responses to two seasoned human comics – Andrew O’Neill and Tiernan Douieb – who performed before the robot. […]

bit miffed that the brainchild line has been re-written to sound definitively like it’s pat and minos only, but hey. in the context of that sentence, it should be my name: comedy lab is my programme, prodding what makes performance and the liveness of live events compelling is my phd topic.