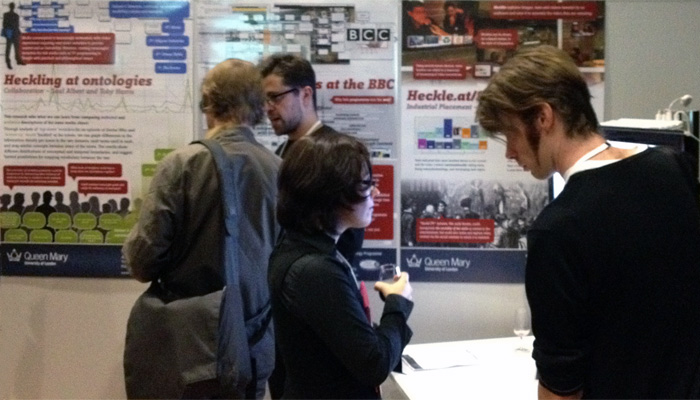 to newcastle to the all-hands meeting of the digital economy programme, aka where my funding comes from. the summer had seen an internship project use the data i had generated in my bbc internship the year before, and from this me and saul got talking about how that could go further. importantly for me, in the demonstration proposal for it, the first bit of writing i’ve been happy with.

it also meant i could get back to the visualisation i’d made for the bbc project, and tie the display of the story-world information to the playing video. and my, how browsers have come on: processing.js, fonts and the canvas element are now happy bedfellows, and will happily alpha-blend over smooth playback of a movie. check it on github

Media consumption is increasingly networked, with richer experiences requiring ever-richer metadata to provide context and so link-ability. However creating meaningful metadata for rich media such as TV programming is fraught with practical and philosophical issues, starting with just who has the time to make it anyway. Through two Media & Arts Technology DTC internship projects – with the BBC (2010) and BT (2011) – two very different sets of metadata have been created that, representing the same TV programme, provide an interesting opportunity to investigate these issues. In one set we have a semantic, authorial representation modelling the content and narrative, in the other a free-text aggregation of mediated conversation about the programme by viewers. As the programme plays, we can compare viewers’ utterances with the TV production’s own modelling of the content.

Our demonstration will be an installation that plays the TV programme – an episode of Doctor Who – with corresponding animation juxtaposing the two sets of metadata. Our research agenda centres around the practical benefit of a mixing the two approaches in creating metadata and exploring the dissonance between the two representations. In short: how much top down do you need to make the bottom up work (or should that be the other way around?); where do attempts to map one to the other fall back to attempts to find some tractability fall back to conclusions that one or the other representation is invalid (and if so, which one – a librarian’s fantasy exposed or interactions ill-suited to being co-opted).

We would gladly host a ‘Heckle at Who’ session, where delegates will watch the TV programme and use their mobile device to contribute to the conversation around the programme. We could even turn this into semantic bingo: can we produce meaning from their utterance derived from the semantic modelling work. This would be well-suited to an evening, social activity.