‘BBC Stories’ was a six month placement project at the BBC as part of my first year on the Media and Arts Technology PhD programme at Queen Mary, University of London.

Digital Narratives at the BBC is an experiment in short-form placements for academics within the BBC. Inspired by ideas of what a ‘web adaptation’ of a BBC property could be, it was determined that that while the BBC had a world-leading implementation of a metadata backed publishing platform, it did not have the domain model to facilitate metadata based publishing of its programmes. The production information was there, but the content information wasn’t.
Over the course of the placement this was addressed as a collaborative process between Paul Rissen, representing the BBC, Michael Jewell, a researcher with narrative modelling experience and myself, Toby Harris, a student on the Media and Arts Technology programme at Queen Mary, University of London.
An ontology was developed called ‘BBC Stories’ that aims to facilitate powerful journeys through BBC content. It presents a minimal, extensible core to meet the joint goals of simplistic application now while remaining compatible with more advanced use as adoption grows.

Parts of BBC Future Media and Technology run a ‘10% time’ initiative. ‘The idea is to get lots of good ideas and quickly built prototypes rather than complete solutions. Then, if the idea is good, it will get picked up by our normal production process.’ (Ferne, 2008)
This project, Digital Narratives, is born out of Paul Rissen’s 10% time, and is an earnest contribution towards some of those ‘good ideas’ getting into the BBC’s production process. In the words of Jonathan Tweed, a BBC employee interested in taking on the ideas for his group’s web productions, ‘how can we get a powerful journey through our content now – and what investment do we need to inspire to get to the vision?’.
So what is this vision? Developed over postings on Paul’s ‘R4 is static’ blog, the ‘Fourth Medium’ post gets to the heart of it, talking about developing something that could be considered a true ‘web adaptation’ of a story – something that, just like a film or book adaptation, for example, can tell the same core story, but in a manner that best uses the opportunities and idiosyncrasies of that medium. (Rissen, 2009)
The potential impact of this direction is far greater than considering the nuances of one medium over another, however. It touches on just what the internet could be, and consequently just what an organisation like the BBC could become. If the the British Broadcasting Corporation was created not at the birth of broadcasting, but instead for a ‘Web 3.0’ era, what would it look like?

Working as a group with Paul Rissen and Michael Jewell, an ontology for the BBC to use for modelling their content has been developed. We have debated its finer points and possibilities endlessly, and I have the chat logs to prove it. As such, my feeling is that the place for critical analysis of this is not from any of us, but from the people who take it on. This is not a cop-out: as discussed in the review section, for any claim of validity from the production or real alignment with end-users the ontology should somehow embody a constant feedback process with its users, seeing what balance can be made between a shared worldview and a world of interpretations. And really, the whole process of post-hoc creation of the story world data is quite ridiculous: surely it should be embedded in the production process, gradually taking form as writers, editors, production staff access and develop it as a shared resource? It would feed back into the production process (somebody is already making prop lists, right?), but more importantly, at that point you have the feedback process there in front of you.
The central notion of interpretations is the second broad contribution. The notion that we are trying to ‘wikipedia-ise’ BBC programming has been a common one, and useful whenever explaining the project. But its actually exactly wrong for one very important reason: wikipedia attempts to present a shared world view on that topic, and despite this project being based around notions of ontology and modelling, this is exactly what we are trying not to do. Rather than present some form of lowest common denominator of agreement amongst the BBC content, we want the richness of all the BBC’s programming to be exposed, drawn together with a web of connections so people can immerse themselves in a world of content from which they can draw their own conclusions, and, perhaps yes, choose their own adventure.

The big regret I have with this project is that the time ran out just when it was getting really interesting. The project now needs some data-visualisation and next-generation drama people to jump on and run with it: having laid the foundations this time around, something I’d more than love to do given the time again. 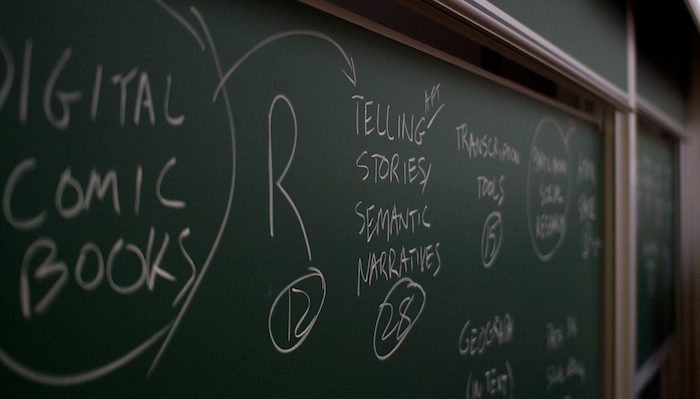 to thatcamp london, an “unconference” ahead of the juggernaut that apparently is digital humanities 2010. loved the fact that for a conference organised on-line and firmly embedded in a world of twitter hashtags and multi-channel ADHD, the actual schedule was organised on the day using a giant chalkboard and people putting up their arms.

i was there for the semantic narrative / semantic web work i’m doing with the BBC, which has a lot of serious implications and opportunities for historians and whatnot, but these tweets are much more fun: 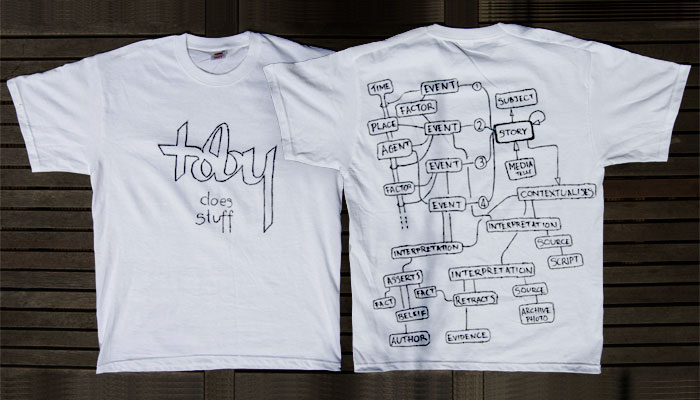 to nottingham for the ‘dtc summer school’, a meet-up of all the doctoral training centres that fall under the digital economy initiative. hosted by horizon, it meant the theme was right up my street: the lifelong contextual footprint, ie. the act of living is generating all this data/media, so what are we going to do with it?

given it was a meet-up and we’re the first generation, networking and sharing of research interests was built-in to the programme. show-and-tell, however, would have just been too conventional, so there were we with t-shirts, pens and 80 sheepish expressions. and yes, thats my shirt above, excuse the terrible photoshop shlepping of back and front. bonus twitter comment from jeremy morley: “seeing the different dtc student groups rather like the bit in shaun of the dead where shaun’s group meet an alternate group.”

lots of interesting stuff, including cool talks from matt adams of blast theory and aleks krotoski of the guardian and much more. it was a shame not to be able to participate in the “life stories” workshop, which was my interest almost verbatim, but the reason was good: my DTC MAT were hosting their own, and it was a little bit crazy: what if data were the fifth dimension? a thought experiment and some design fiction. there’s a kind of slides-made-through-the-workshop pdf attached, including the diminished-reality-3000™.

the marvels of the internet and the crowd there being what they are, there is already a series of blog posts that outlines the various talks and activities there: props to liz valentine. 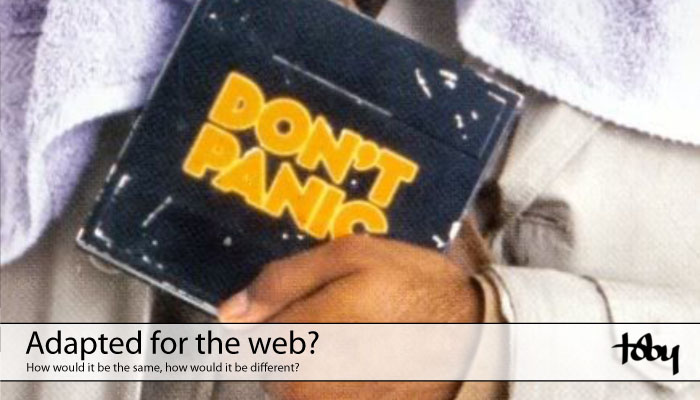 time on the bbc stories project is up, report is written, academic viva viva’d.

couldn’t help myself but use hitchhiker’s guide to the galaxy as the example of a property crossing media. there’s a kick-ass letter douglas adams wrote to some film executive when hhg2g was in development hell that starts to open up just how different the approach and result of the different adaptions should be. however quoting it (i’m sure i read it in the salmon of doubt) would have been an indulgence too far for a 10minute whip-through, so here is me venting that one.

its a good presentation, both an interesting topic and nice slide deck, i hope to get it recorded to go with the pdfs of report and whatnot i have made and put up as a tobyz.net project page: project/bbcstories.