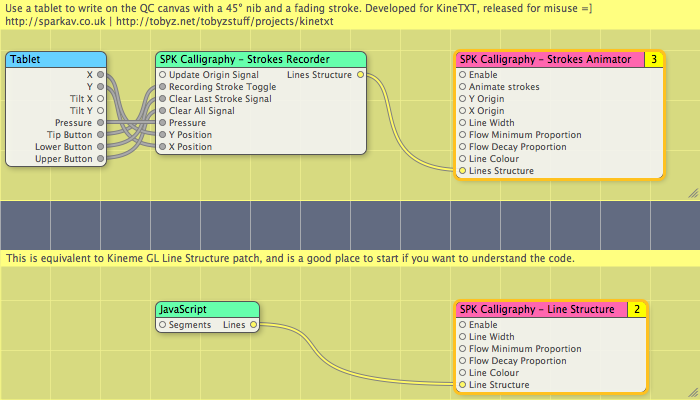 KineTXT has spurred many custom plug-ins, generally either esoteric or usurped by kineme or the next major release of QC. the latest however probably deserves to see the wider light of day, and so here is a snap-shot of it having just passed a notional ‘v1.0’. its two patches designed to capture and render handwriting and doodles from a tablet, but they should be pretty useful to anyone who wishes for some form of digital graffiti in their QC compositions.

if you want anti-aliasing, you’ll need to leave the QC app behind unfortunately, but if you can run without the patching editor window its just three lines of code to add to the qc player sample application and voila: this plugin and all 3D geometry become anti-aliased. vade worked it all out and outlines the territory here: http://abstrakt.vade.info/?p=186.

if you want different nibs, pen-on-paper-like textures or suchlike… well i have my needs and ideas, but the source is there. share and share alike!

the plug-in is released under gplv3, and is attached below.