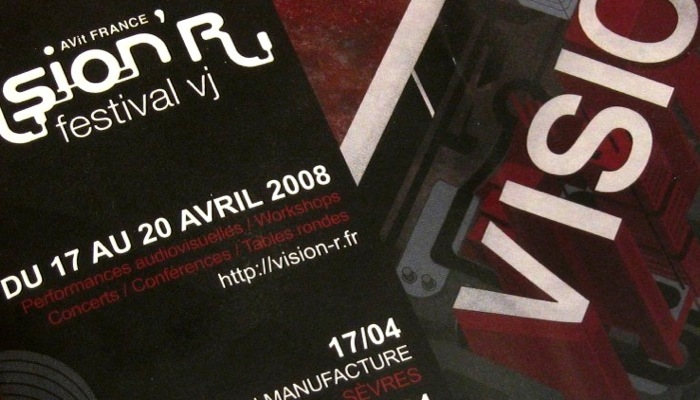 Arguably, the first time the international vj community got together was at the “vjcentral gig” aka avit. A French duo called TZ-Team came, and while enthused by the experience, said it just couldn’t be done in France at that time; the club scene worked differently, the vjs that were out there were hidden in niches and there was no community to speak of. So it was a particularly nice experience to walk into the first Vision’r, effectively avit paris, and see a whole scene very clearly alive, very clearly doing great things. It was also the first time I’d seen frozen-chicken-porn visuals, totally arresting and different to the club clichés, and it was where the wonderment of the vixid mixer was unveiled in beta form. That was 2006, and now Vision’r is in its third edition. The feeling of being somewhere unique is still there, and it still feels slightly shambolic, but the the quality of work and exchange is better than ever. If I could explain why, I’d hazard a theory along the TZ-Team lines where isn’t so much clubbing and club-vjs but there is a strong culture of innovative live performance, which brings visualism and a/v trickery with it, but through a very different lens. Combine that with Vision’r having the feeling of a meeting of practitioners rather than showcase-for-others, and you certainly have an interesting weekend.

So in I walked, and saw Alchimie, a one-man show with narrator/poet/rapper riffing on graffiti (in French, I can’t say I got too much of the literal meaning, but such was the strength of the performance) amongst a minimal-but-effective virtual set made of projections, using prepared footage, live cameras and live drawing with a Wacom behind the mesh. And of course, it ended in the middle of the dance floor covered in paint, what else did you expect?

A beautiful example of a club culture cliché being taken to high-art while loosing none of the jump-up excitement of what made it good in the first place was ‘Projet RVB En Alpha’, which combined a dancing girl, light installation and vj feed into a sublime whole, with I surmise the alpha from the title referring to how the dancer’s movements become the (literal and metaphoric) key to the motion graphics. They even had the stagecraft that when the dancer fainted as ending, the geeks behind the laptops caught her.

And to tie Vision’r back to Mapping were SATI, gallantly performing at both festivals over this weekend. A duo of which one half is long-time VJ Jesse Lucas, and yep there are some brilliant visuals really taking advantage of a dual-head set-up, they are primarily a band, both in it together, both making the music and seeing where it can go… and its that attitude which really elevates them.