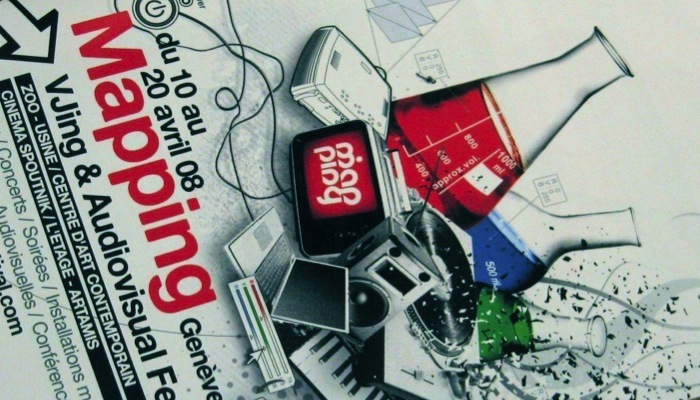 The first two Mapping Festivals quickly became legendary. An audio line-up worthy of a music festival, a cream of visualists married to a playground of seemingly a thousand projectors, and the whole programme rammed through one venue over one weekend. Complete with dormitories above and sofa-strewn cinema to the side, the party didn’t stop.

Now in its fourth edition, Mapping has changed into a two/three week showcase split between the original venue ‘le zoo, pour les animeaux nocturnes’ and Geneva’s modern arts centre hosting gallery installations and an audio-visual stage. Having left the particle systems, avant-garde interactivity and deep geekage of Node to come to Mapping, it was quite a jump to walk into a room literally full of arse-slaps with the Chicks On Speed inaugurating their gallery installation “Butt Slap Bongo” with a suitably frenetic performance. Another interesting installation, in entirely different ways, was “News Jockey“, an informatic spread tiling across a whole room. You typed in your headline, it did the rest. It was also the logical successor to last year’s “web-jockey” installation, delivering on the promise shown there: always nice to see generational progress, directly related or not.

Still in the modern arts centre, the audio-visual stage saw a beautifully contemplative performance by Scanner and Olga Mink that is hopefully the start of an ongoing piece, and also sees Olga breaking out of her graphic comfort zone. The last performance of the opening weekend was a journey into the mind of Raphaël, a renegade filmmaker and long time Narrative Lab favourite. Hard to describe, and as far as I’m aware only experienced at the odd festival (self-promotion, website? pah!), if you see Raphael [ES] on the programme, just go. Crazy, wonderful, not entirely to be understood, but definite in the feeling that you viscerally touched something.

With the first weekend over, and Vision’r clashing with the second, it was time to leave. And also, who would stay for both? Which is perhaps the issue Mapping faces, being effectively two mini-festivals without anything to make the week/two weeks a compelling whole. But if the organisers can do this, I’m sure they’ll work it out. No write-up, however subjective and under-representative, could go by without a mention of Mapping’s 8bit night, with bubblyfish/chika/akira/etc all rocking out beyond their laptops. The special mention has to go to Meneo however, an 8bit musician who tours with entter providing an a/v whole. As you’d expect, the graphics reinforced the 8bit theme and a Meneo identity, but there were real moments of something way beyond that, with a whole world being created and stories spun. Oh, and lots of nakedness at the end: A visual performance of other sorts, and what was it with nakedness and performance at Mapping?