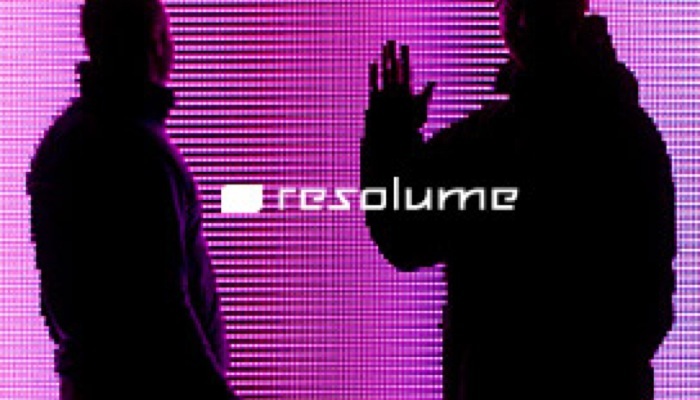 Also at Vision’r, and keeping the tradition of the vixid unveiling, were Bart and Edwin with Resolume 3 on their laptops, revealing the future of arguably the most popular vj software out there, and with Russell of VJamm and Freeframe also there, the future of the vj fx standard. Resolume and FreeFrame being both massive but a bit long in the tooth nowadays, this was quite a one-two.

Resolume: A sneak peak for a summer release, the big news is that its cross-platform. Yes, Resolume natively on OSX as well as Windows, and a new Resolume fit for 2008 rather than an incremental upgrade of Resolume as we’ve known it. One and a half years in development, its seen a complete re-write in c++, it now uses Open-GL for its rendering engine, and is now fully audio-visual: sample tight too, allegedly. The interface has also had a complete overhaul, and is not just constrained for a fixed three layers. Its also lost its trademark font and idiosyncratic colour scheme for clarity’s sake, which to me is a kinda shame but the price of progress (or maturation?). And when I started taking photos, Bart said to keep it a secret… there’s still more to come. If you want the spoiler…

FreeFrame: If Resolume is cross-platform and renders on the GPU using Open-GL, then what about all those FF1.0 cpu-bound effects that vastly expanded Resolume’s palette? The answer came from Russell, originally Mr VJamm and a leading member of the FreeFrame group who announced the FreeFrame 1.5 aka FFGL spec to the VJ/realtime video world, bringing GPU processing to the FreeFrame standard. It may have taken them a while, but FreeFrame is a broad standard and consensus based, so now they’re here, the form says it will be robust, adoptable and here to stay. If you’re a VJamm user, you should be able to get your hands on the latest, FFGL sporting, build.