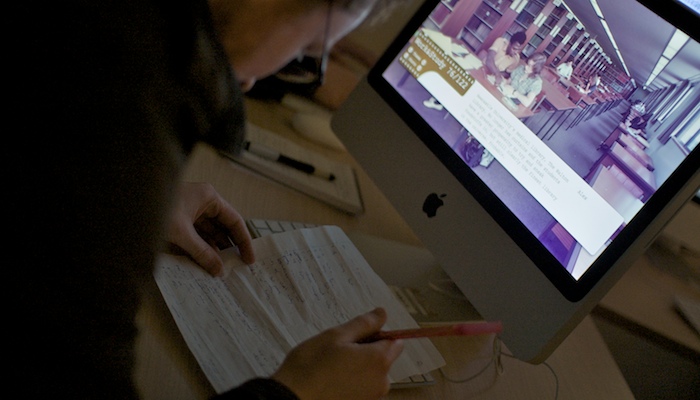 photobank couldn’t have happened without novak’s curation of the opencity event. talking about our joint project kinetxt and things like memory bank led to the idea, and being given a development fee and the host event made it possible. they also did a great job in finding some local writers to be the masters of interpretation for the weekend, of whom alex is pictured above, scribbling around his notes for the final haiku-like selection. 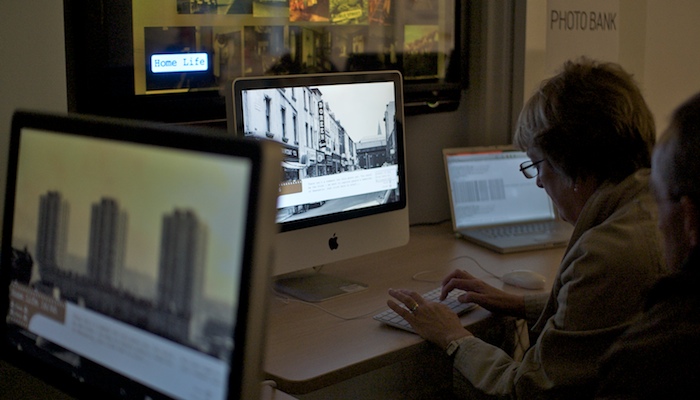 after a month with a heavy dose of xcode on the side, its up to newcastle clutching two fledgling applications to marry with newcastle library’s digitised photo archive, a bunch of iMacs clustered around a 1080P plasma screen, and the memories of the visiting public. it was a heavy weekend of being there with the installation by day and further coding by night, but out of this a very real and user tested photobank has been born.

as the latest manifestation of my personal practice, and something that will very likely become part of my PhD research, there is much more to say than a quick diary post can stretch to. so the full project page will come, i guess in the meantime its easiest to point the lineage to kinetxt which was - with novak - my first attempt at creating an environment where layers of interpretation are encouraged, and they in turn add up to something interesting and unexpected. photobank tries to address this in a more focussed and repeatable way, starting with a base of media archive, and ending with a flow of illustrated short verse.

at the nuts and bolts level, its a full screen photo browsing and annotation application that can be run on many computers for mass interaction by the public, which are networked to a central computer holding the photo archive and running the central display, which acts as both an attractor for the public, animating through the archive and latest annotatations, and as the writer’s tool for creating and showing mini-narratives by selecting six photos and their annotations, and handwriting short verse around them. all written as native mac osx applications using objective-c/cocoa and quartz composer.