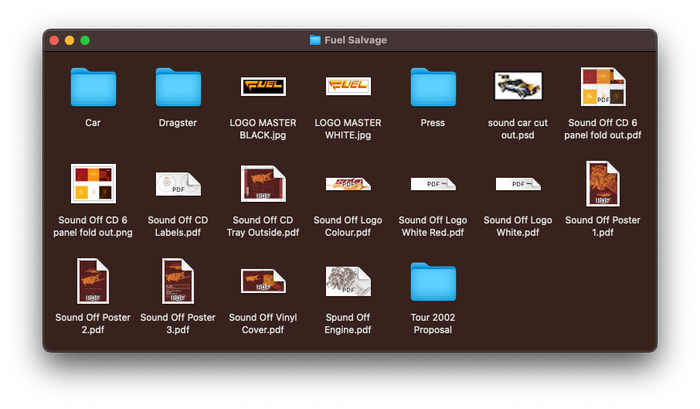 replacing mp3 rips made twenty years ago with lossless ones took a trip into the loft for the cds. plus an ebay order, ‘cos one wasn’t there. but at least that was possible.

one of those albums is on streaming, but beyond that, there isn’t much. fuel records doesn’t even have a wikipedia page[1].

but i do have an archive. doing visuals for the sound off tour, and generally being part of the whole thing, i made a digital raid on the office. one of the folders is called ‘fuel zip’, which it occurred to me a minute later, was called that because it was a copy of a zip disk… which really dates this.

and what else dates this? most the files are dead media. file formats of software that no longer exists, or worse: the classic Mac OS creator metadata long stripped, now just an extension-less binary blob. i find this quite depressing, especially given this all started by typing in ‘fuel records’ into the internet and there basically just being nothing there.

but there is some good salvage. a good chunk of which is down to postscript files, now converted to pdfs. though given it was these artwork files being in plain text that let them live on, perhaps pdf isn’t quite the win i imagined. they’ll be useful for this round of production, at least.