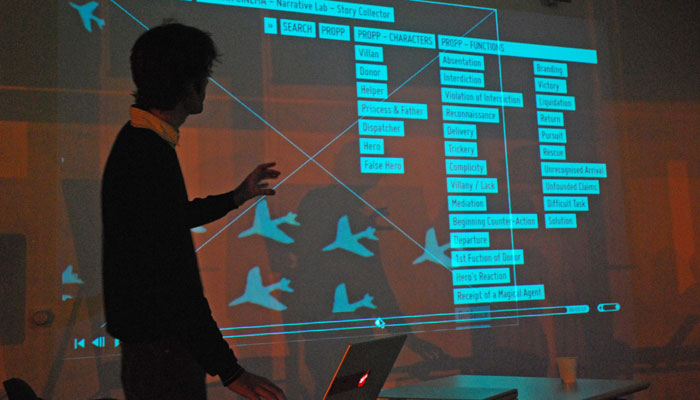 In the 1970’s cinema was expanded; in the 1990’s it met ‘new media’ as soft cinema. In 2010 the technological landscape is ripe to combine these, siting cinema in a live performance context. As such a body of work is built, called ‘live cinema’ by its practitioners and curators, it is worth taking a step back and asking just what the value of the live in live cinema could be?
To examine this closely, we first need to address what live cinema could be, and what current practice is.
To address what live cinema could be, we will extrapolate from the aforemen- tioned expanded cinema as characterised by Gene Youngblood, and soft cinema as characterised by Lev Manovich. We will consider a ‘cinema of the imagination’ as practised by oral storytellers, and hear of directors such as Peter Greenaway and Mike Figgis who have experimented with live perfor- mance as well as enjoying Hollywood success.
The current practice of live cinema will be presented through an experimental documentary offering a novel approach to representing this overtly ‘broken out of a pre-determined, linear, framed practice’ in pre-determined, linear and framed video.
In summarising the characteristics that could make cinema live, we will con- clude that an analysis purely of production and medium does not provide suf- ficient differentiation from previous forms of cinema to justify any claim of live cinema to offering what could not be offered before. We shall instead turn to studies of other kinds of live performance and focus on the human interaction and ideas of audience. By identifying some unique qualities of storytelling, we shall arrive at a conclusion of what could truly make live cinema an art form with unique, compelling qualities: where core to the experience is that as well as a story is told, the story world is explored as a group experience.