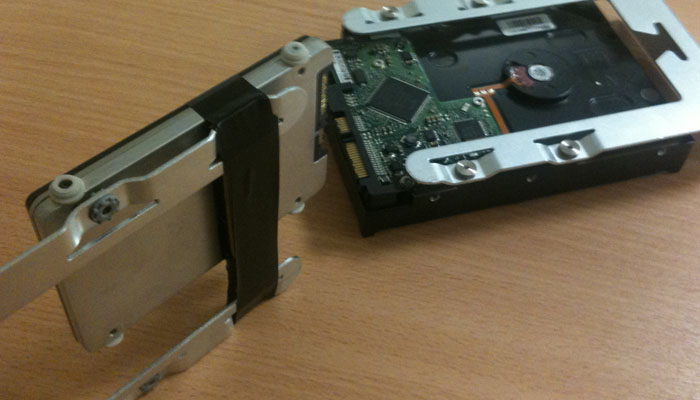 having been well received at the ‘holotronica’ screenings at kinetica art fair, d-fuse were invited back to perform live as part of onedotzero’s london festival on the musion setup there.

as the musion setup is a transparent (pepper’s ghost screen in front of a ruffled curtain to set a depth cue for the audience, and the d-fuse piece ‘particle’ we were to perform is an explicitly multi-layered projection, we needed to replace the rear curtain with a screen. at kinetica, the effect wasn’t what we hoped for, so we went to musion’s vair old-money hq in the week beforehand to experiment. after testing some combinations of screens and projector placement, the real breakthrough was just how transformative a performer’s presence was between the screens. having a body on stage, even if stuck behind a laptop, transformed the imagery from something easily flattened into a composite to something that had depth and mystery as the straight lines typically projecting across the stage to screens behind would wrap around the organic form, dipping in and out of the void. that was partly to be expected, but i think there was something also more subtle where it grounded the scale of the piece, adding back something that was subtly set by the texture of the curtain in a straight musion setup.

of course, we arrived at the bfi and were shown to our performance space… front of house. it was a compromised gig in many ways, testing out a dual 1024x768 setup and content redux instead of our well developed triple 640x480 setup and media bank, but that really killed it for me. c’est la vie.

there was some consolation in that we had a top-spec mac pro waiting to be returned off the back of a commercial project, and so i got to test how particle runs on a machine that isn’t my four year old laptop. you can guess the answer, mmm! first, however, to get the solid-state drive in there… courtesy of a lollipop stick, some tape, which wasn’t much short of a wing and a prayer. and with the lack of a musion hq test shot or crowd-sourced photo of the gig, thats what sets this entry.