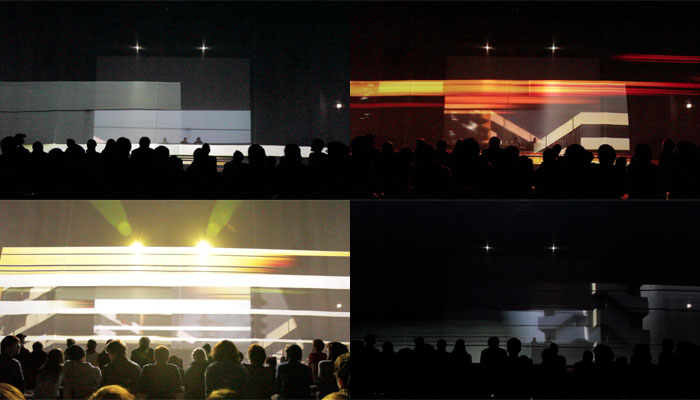 live audio-visual projects are hard to take a measure of. its something that only exists in the moment, but in that moment you, as the performer, are as far removed from a position to judge the work as possible: you’re not in the audience experiencing the whole effect, but on-stage in the middle of those screens locked in a specific mindset… if you’re lucky you get to look up from the laptop screen to the monitors, which themselves are no real representation of the final projected whole.

so its all very subjective. the first gig of particle was a triumph - or felt that way - and i think that was a combination of the release of something that you’ve worked on turning out good as it came into being for the first time properly, along with some more-than-we-realised luck with the staging, and a lot of simply mentally editing out the bad bits. at least here i can qualify it somewhat with comments on the [quick edit i made] from our recording of the gig, pretty much all of which are great.

since then, lots of ups and downs; starting to concentrate on the weaker sections, lots of juggling the content around, spending too much time trying to get the midi-sync working (particle is jinxed there, i know not why), and finding out that the particular geometry of stage, auditorium, projector and screen is much more critical and subtle than at first it seemed.

so it was really good to finally have a performance where it felt like we’d really smashed it, a true high. the above image are frames from a ten second excerpt from our recording that in itself forms such a satisfying loop. we don’t have a full recording, but we certainly have the footage to make a proper promo edit with that as the base. huzzah.

comedy bonus: there’s a video podcast from the festival with us in it. the footage is a rum selection, but yes, it really happened.