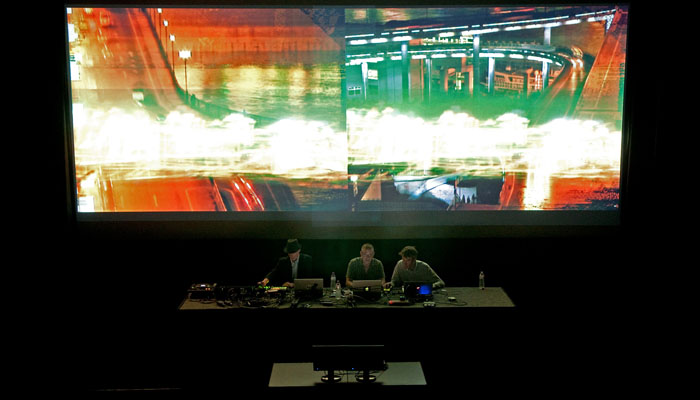 latitude is d-fuse’s established live cinema piece, and the one that took me to rio last year. apple like it too: quicktime hd gallery

produced for twin dvds and a bit of optional laptop noodle, here at on_off is its first outing as an entirely laptop based performance. the change is to bring it in-line with the new HD-savvy live setup i’ve been developing, where adding ever more SD dvd streams won’t cut it. the benefit is we should get better quality content with twin 800x600 progressive outputs rather than twin PAL/NTSC, and we have far greater creative control now the performance sits in our vdmx setup. the try-it-for-the-first-time surprise was that we weren’t getting 100.00% smooth playback for the straight sequences, which on a cinema screen for a theatrical audience becomes an issue. so with some juggling with quicktime player, we had the best of both worlds and rocked it.

of course, now that we’re dvi/vga+progressive, and have spent the past year dealing with HD, we need to go back to the original sources and remaster it all!