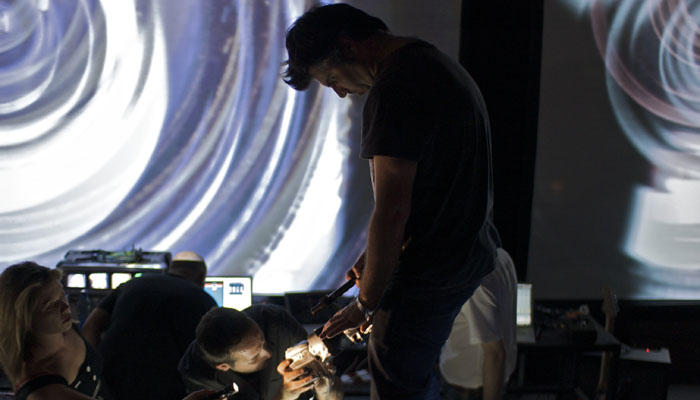 following teatrino were the erasers, which was a great thing to witness but fell short of the ambition i had for it watching the start. they had a great table full of things, all categorised into rows, and it started magnificently with a really nice motion graphic triplehead vj thing that looked like we were in for a real engaging narrative or development, and was all the better when you realised half the content was actually coming from live filming up front, with performers and cameras manipulating print-outs, ink and whatnot into a crisp graphic whole. trouble was, this was so perfect to my eyes that when their next ‘track’ was a real dive aesthetically and musically, and it became clear that it was going to be improvised chaos riffing against well-tread themes without saying anything new or interesting, i felt really let down despite many compelling moments of live action that followed.

its in their artistic statement to have an ‘open loop’ between the back-row vjs and musicians and front-row performers and cameras, but ultimately i think they would really benefit from an outside director coming in and creating a focused show out of their themed chaos.