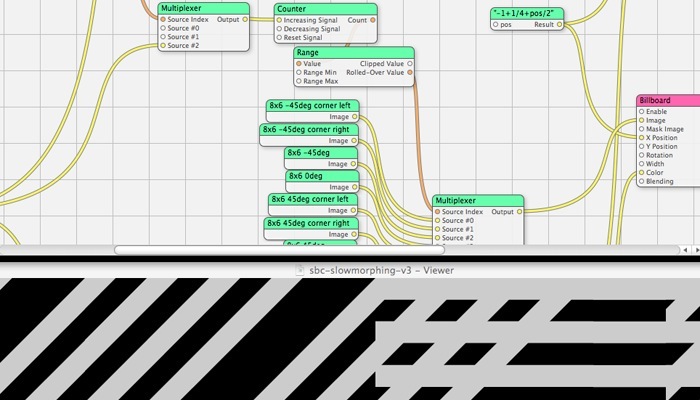 back in the early days of visuals in brum with the most talented stef lewandowski, computers could barely hack video and so the dynamic stuff was a combination of flash and good old mixer twiddling. flash was cool for making loops, at a basic level if you had a few layers, you made them different lengths and they would loop independently pretty much always giving you a new combination with each frame… do that with a pre-rendered loop and it becomes clear you’ve only got a second or two worth of frames pretty immediately. then you could bring in text read on the fly into your graphics and allsorts.

all that pretty much got left behind when i went to the single laptop with the vdmx video based vj setup, quicktime loops or nowt. much richer, much more interesting capabilities for mixing that video, but no dynamic/generative content.

so continuing the theme of the vj platform really delivering on the mac nowadays, with dual-core/decent-gfx-chips and osx/vdmx-in-cocoa, it was nice to have a commission to make a graphic layer for the light surgeon’s contribution to the reopening of the royal festival hall, a commission where keyframing it all would be madness, and new the visual identity of the south bank centre lent itself to a generative machine.

so not quite hello flash again like the days of old, but quartz composer parsing the audio spectrum and turning that into reactive combinations of the sbc’s weave. and given the pain of editing a 4xSD wide canvas from a huge media library, its actually a shame the whole thing couldn’t have been a prototype for the innovative live setups coming into view.