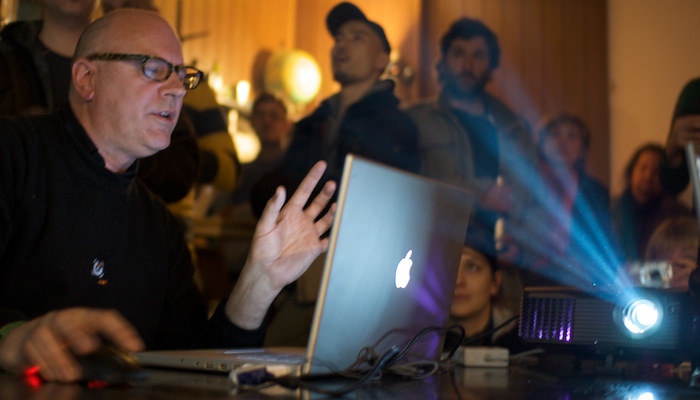 derivative were over from toronto for transmediale, and it was suggested they show off ‘touch’ at the visual berlin meeting. and quite the jaw-dropper it was.

greg hermanovic started by demoing his ‘drunk vj’ mixer. all so-so, designed for a touch screen but still a ‘flight deck of buttons’. that was, until he zoomed through the interface into the workings below. behold: a fully node-based realtime engine with 3D heritage from houdini and a recent video re-working, and so confident in it’s power every node featured a preview of what was passing through it, and the patch cords were even animated. and the rabbit hole continued, zooming futher into nodes to reveal they were themselves patches of further nodes - right to the point of answering my standing interface question of “so what if i need the slider to have feature x”, because all the interface elements are patches themselves. touch077 looks to combine previous alternate favourite of vvvv’s elemental and 3d power with proper video support, while at the same time dissolving the concept of editor and output: quite something.

so while greg’s mixxa patch may not have floated my boat so much, the platform he built is amazing. if i wasn’t committed to cocoa+quartz composer, i’d be investigating it very deeply right now.