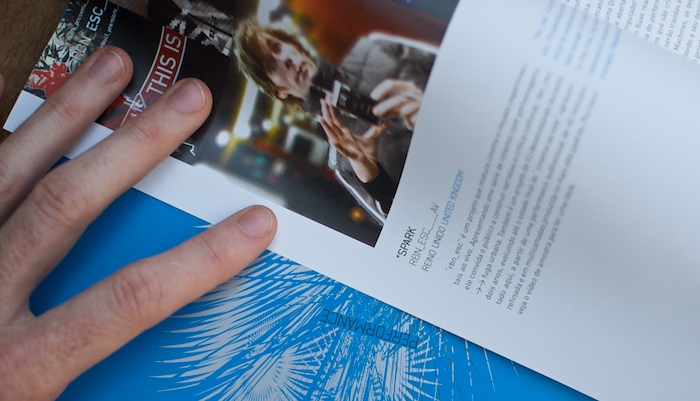 reservations about file apart, its damn nice seeing yourself in print. their catalogue is truly something to behold.

i was also interviewed by mtv before my performance, talking briefly about rbn_esc and some of the ideas of live cinema. that hasn’t found its way to the internet as far as i can see, although somebody does seem to have uploaded some filmed excerpts: http://www.youtube.com/watch?v=71MDtdPm3bY&feature=related 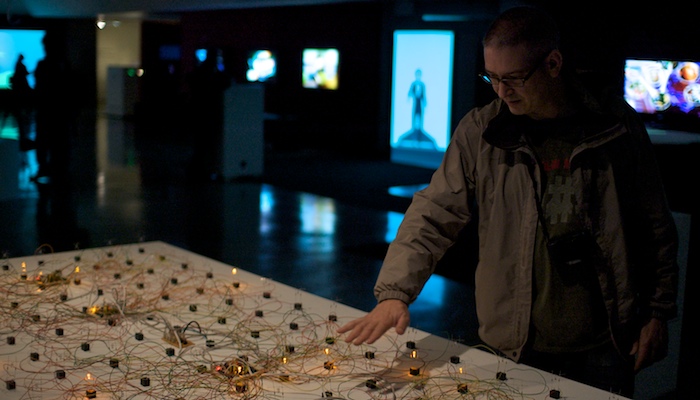 the file exhibition had some nice pieces. i would link to them, but the file website is impenetrable (in marked contrast to their amazing catalogue, to follow…).

my favourite was a simple sound installation executed flawlessly. as you walked down a sterile glass corridor, you triggered a sonic world crossing the border at tijuana via a jumble of perspex stalks hanging in your way with slightly/suitably sinister looking sensors at their tips.
› nina waisman; with pd programming by marius schebella / between bodies (tijuana) / united states

pictured is something that had a little trick that transformed the whole thing. you trigger a game of life simulation spreading across the whole table by waving your hand over some part of it, which the artist’s statement elaborates on. but the magic was the oh-so-very-digital lights were sitting atop electro-mechanical relays, which give a really satisfying click as they turn the turn the led on or off, which imbued the ‘life’ in the installation a visceral, swarming, physicality.
› leo nuñez / game of life /argentina

i was also happy to finally see the mechanical recreation of arcade game world of mario in the flesh. the idea is nicer than the reality, but that doesn’t stop there be real wonder in pressing the NES game pad and seeing and hearing a meccano-like contraption scissor mario in the air, rather than it just happening as pixels on a screen.
› keith lam / moving mario / china

finally, as d-fuse, we stopped in our tracks when we saw a triple-head montage of an abstracted city passing by: not a million miles away from a description of particle. good that it was a) really well done and b) exploring a completely different, almost brutal, aesthetic.
› marina chernikova / urban surfing moscow / netherland 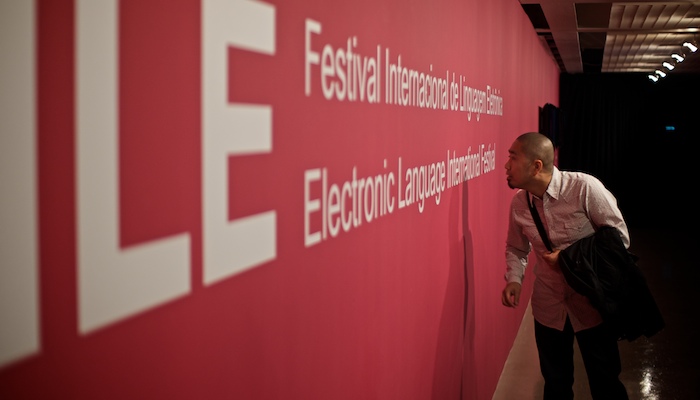 as it happened, the pretty reknown FILE festival was the following week, and we were in são paulo already. so an application for rbn_esc from me later, and some d-fusing from mike, and we’re staying on for particle’s second outing and rbn_esc’s debut outside of europe (somehow, thats true/).

it was a weird experience though. for all of the festival’s reputation and a hotel bursting with artists, it was a strangely empty experience. i’m happy to support festivals without proper funding, and itaú cultural who brought us over deserve a great deal of respect for allowing to perform particle again and dealing with the flights. i’m not so happy doing that and finding the festival is all facade, with no real reason to be there as an artist beyond getting the tick-box kudos on your cv, and seemingly no concern for building an experience for the audience either.

nice to cross paths with motomichi again, pictured, who participated in the avit vj festival in brighton, 2003. his performance at file hypersonica was a highlight for me, a vj set of his black/red/white trademark animation that never lagged, that was constantly moving forward.