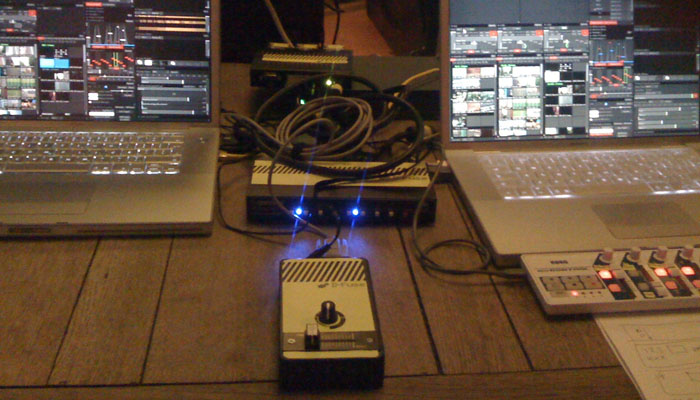 as a warm-up to d-fuse’s trip to brazil, we performed a test of the new live piece “particle” at electrovision. it definitely felt like a test, as things were plugged in and loaded up to be used in anger in for the first time, and while i wasn’t so happy creatively with the form this first rendition took, that is secondary to what happened there: the dvi-mixer i’ve been dreaming of for years - and that my work turning transforming d-fuse’s live shows has been predicated on - worked as simply and unobtrusively as it should. all the sophistication and craziness lives in the laptop, where we have creative control as far as we’re wishing to configure and code, and we have hardware reliabiliy to ensure we can a) guarantee solid output signal to the projectors no matter what is going on with the laptops and b) mix together and tag team the performance between two visuals laptops.

i am working on getting this out to the vj world for a limited run, and a full announce will follow. it will cost somewhere in the range of a $1000 - £1000 , input and output VGA and DVI, and allow you to do what nothing else will: dualhead at 1600x600, triplehead at 1920x480, HD at 1920x1080@60Hz. it is based on a conference bit of kit that i have developed a controller for, and that i hope to get some extra vj-love put into its firmware. the trick to both those goals is to aggregate our demand into one order big enough for a production run of the controller to be made and for it to be worthwhile for the developers of the conference kit to spend some time enhancing it for our uses. so expect a full announcement once everything is locked down and orders can be taken. 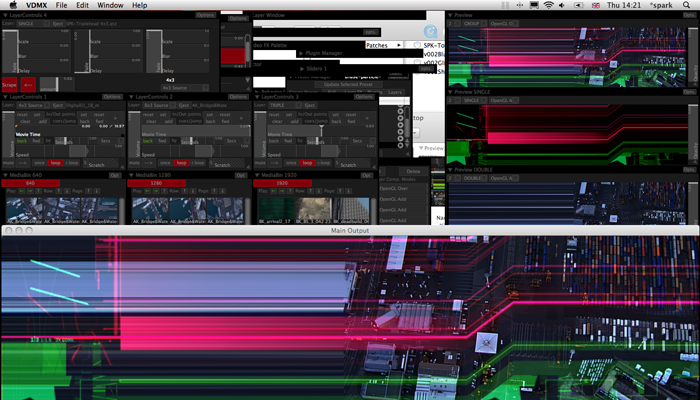 beyond visible things like keane3D, lots of work has been going on in the background with d-fuse this past year or so. some of it pitching, some of it pushing along internal projects, and at the moment a massive commercial job under NDA: all things which don’t really get to this diary. but i’m glad to announce a little preview of something i’ve been working on a while, which is transforming d-fuse live.

as part of electrovision on saturday the 18th july at roxy bar and screen, d-fuse will be performing for the first time with their high-def laptop live setup. it will be something between a test of the setup and a preview of the performance that will become ‘particle’, so all are welcome and beta-tester feedback appreciated!

there’s much more to say about what has been developed for this setup, but in the meantime here is the blurb i wrote for electrovision:

D-Fuse present a work-in-progress viewing of their new live performance, an experimental audio-visual triptych exploring urban conditions. Having mastered an HD production process for films such as Brilliant City and Surface, they have challenged themselves to bring this back into the live arena and with the graphical sensibility they are noted for.

pictured: vdmx work-in-progress setup, with amongst other things custom quartz composer 4x3 into 12x3 layer, backed by unreleased open-gl based qc plugins, and fronted by a native vidvox control layout. 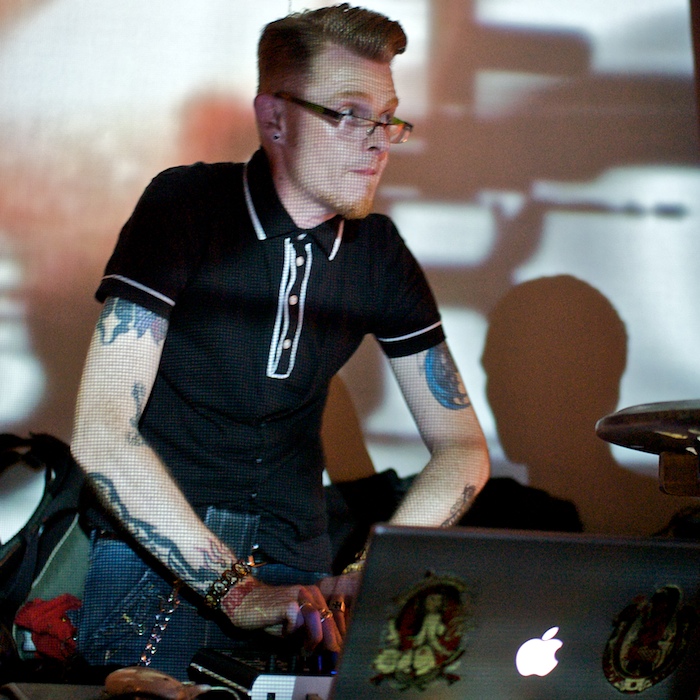 back to london, and it’s mo’s vj night. back at the roxy too, the old-timer venue sporting an old-timer line-up with ben sheppee in from japan and scott amoeba up from brighton (pictured - a true ginger terrorist/).

also a shame to have missed tom blinkinlab’s first live set, having worked on a light surgeons project with him before, and it being audio-visual from the loop-up with an architectural bent. 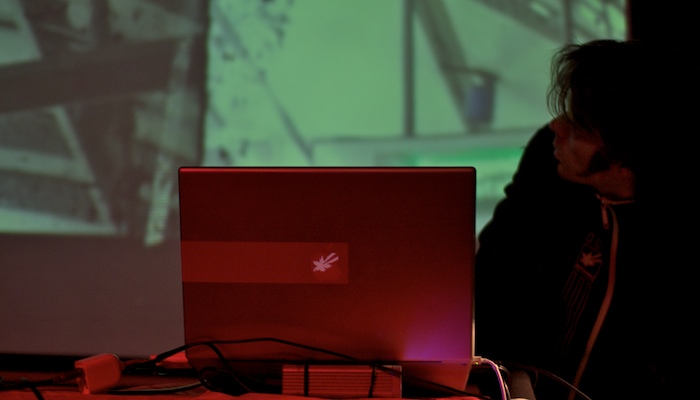 a nice performance i think: not that i could see the screen or a proper monitor, but everything largely worked as it should, and its not like i haven’t done this before. even on that, though, still many vj types who hadn’t seen it, even on home turf. 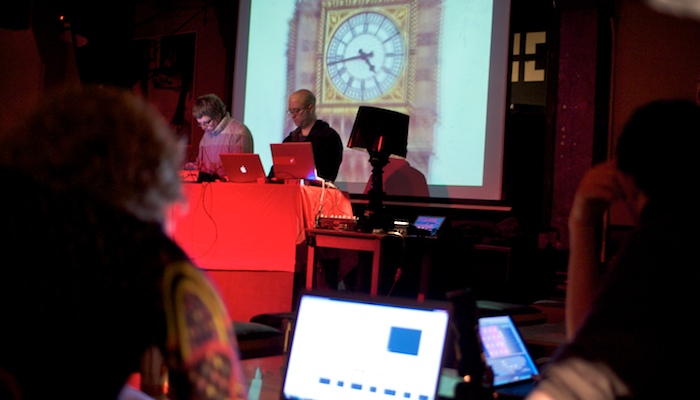 electrovision: into a mini vj meeting

nice to see mo’s electrovision night turning into a mini vj meet. strangely nice to be out on a monday too, in a venue with battered sofas and all that.