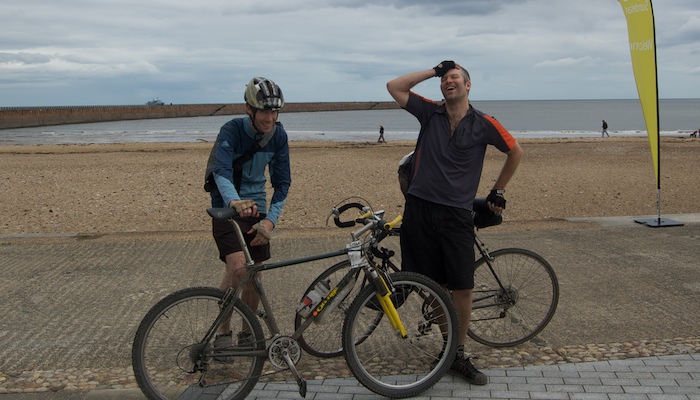 it was pretty much spinning the top gear all the way for those final 40 miles, i can’t say my spinning was as fast as scott could have or the few who did storm past us (perhaps retribution for us stomping past so many on the earlier uphills!), but it was damn speedy and there was no point in stopping for lunch: we were in sunderland by two. and the dream of a celebratory and anaesthetising irish coffee, the thing that had kept me spinning those last ten miles, turned out better than i could have imagined. mmm, aaaaah; as we quietly deflated into shells of people. 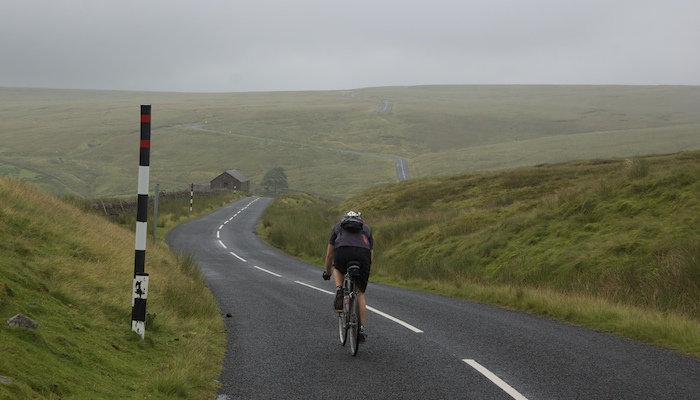 the second day was one of two halves, separated by the most appreciated hot chocolate and scone i’ve had for years. up and down and up and down the valleys and villages of the pennines, then some amazing long descents and ‘hand of god’ tailwind moments speeding through moorland so desolate they mark the road with tall posts as if you’re adrift at sea. and just when we thought we’d climbed a hill so steep and high there couldn’t surely be another, and then saw we weren’t even at the top but it instead just flattened off a little before winding way over a hillside far to one side, there was a signpost off the road, a welcoming cafe, and the memory from last time that this marked the point where you joined an old railway path and it was 40 miles hardpack sloping gently to the sea… 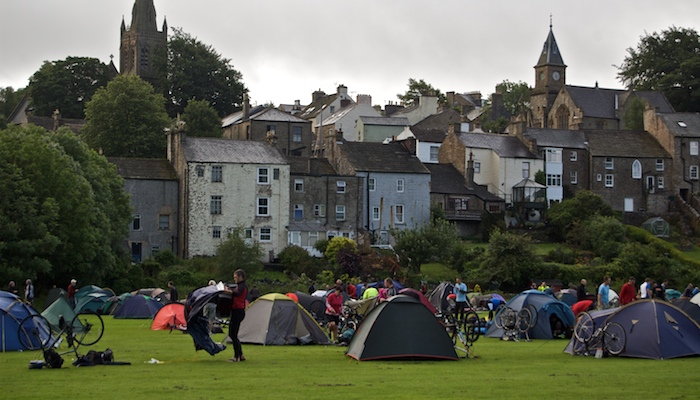 its not every morning you (well, i) wake up at 6.30am with geordie banter all around and people already taking their tents down. in my memory, this moment is forever dedicated to cumberland sausage baps and baked beans. mmmm. 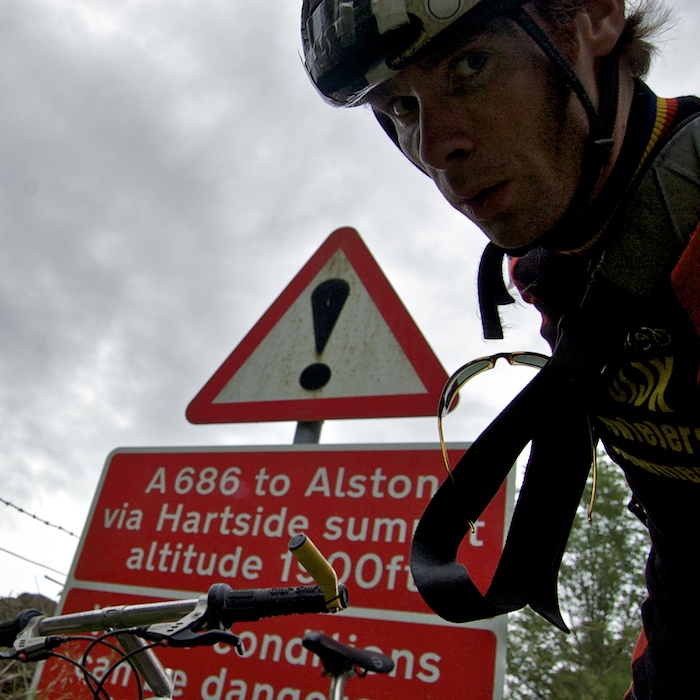 c2c - at the bottom of hartside

when i cycled the c2c before, it was over four days and we carried our luggage with us in panniers. i imagined this is how we’d do it again, until i saw the curveball of the c2c-challenge, which was happening on one of the weekends we were thinking of doing it. and so with a simple “i’d be up for that” from scott, the whole idea of a leisurely coaching-inn-strewn jaunt was transformed into a two day sprint with the luggage carried.

having your luggage carried changes everything, it has to be said. you can cover so much ground, and with such a sense of freedom. the price to be paid however, was that the campsite arranged by the challenge was the other side of the highest point of the whole british cycling network, which you approached already having traversed 60 miles up and down through the lake district. the sun had gone behind the clouds, a headwind had made itself increasingly known, and the danger sign only added to the feeling of “this will break you. do not doubt it”.

…although taking it one by one scott did get this nice sequence of a stream that needed to be forded. 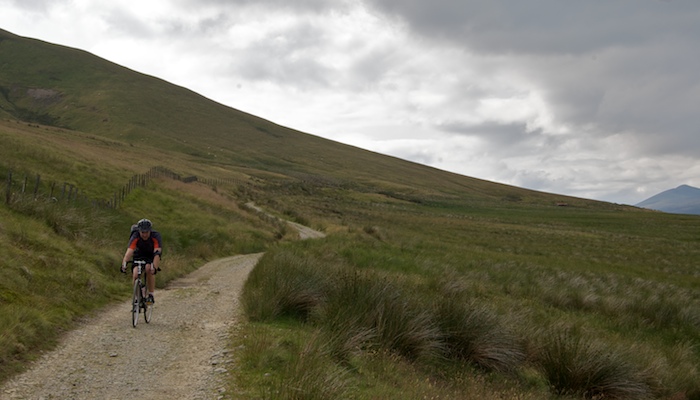 and here we are having taken the “file under batshit barmy” option of scott taking his old, part exchanged, of-unknown-strength road bike over a mountain. it was called “the old coach road” after all.

and it might look ok here, i wasn’t quite in a position to take the photos while carrying my bike up the straight up bits or plunging downhill with stones flying everywhere. it turns out that this indeed was an alternative route, with the main route staying on-road and staying much lower down on the other side of the valley with the trunk road going through it. i can’t remember the exact wording in the map i looked at with some fellow riders in a cafe later, but it was something like “very rough, unsuitable for touring bikes, only to be taken in good conditions”. no mentions of 1970’s racers =] 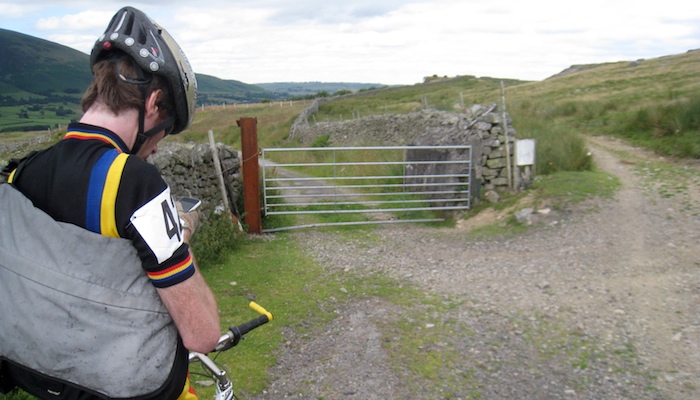 c2c - google maps on a mountain side

…having got a bit up the hill / mountain / range, there was a junction. one way looked ok to cycle, the other looked very off road. too off-road for the C2C. straight up, super stony. so we go round the bottom of the mountain till this photo, where the route has veered way off back down, us going “this ain’t right”. at this point i curse the bravado of not buying the C2C route map (its signed! we’re doing it with 200 other people! this is a two day sprint - we won’t be taking an off road options!), and pray for a data connection. if only i had taken a screenshot: the options were chicken out and descend to the trunk road in the valley pass, or take this winding solitary route, paging through screens and screens of mountainous googlemap nothing, which obviously was the C2C route. well, i’m on a mountain bike, and i’m damned if a mountain is going to get in my way. scott, however, is on a 1970’s road bike… 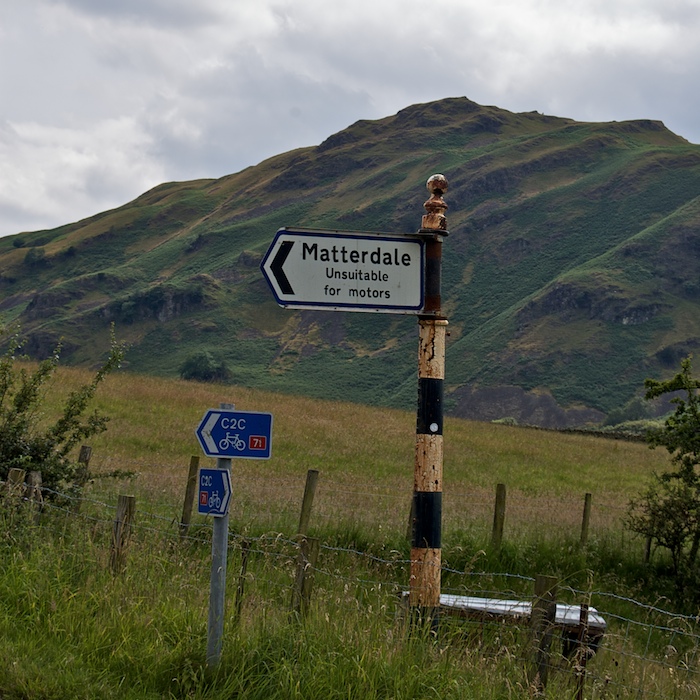 30 or so miles in, many hills traversed, lucked out with lunch at the lakeland peddlar. buoyed with enthusiasm, we follow the signposts of keswick, and all is good (well, as good as starting again uphil with cold muscles after a lovely lunch in the sun can be) until we get to this signpost. which points straight up over a mountain… 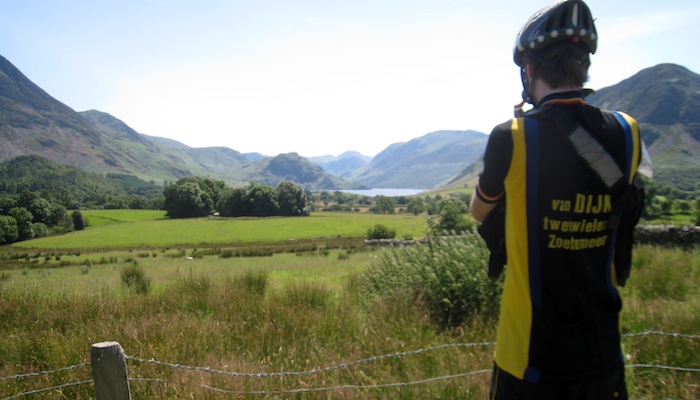 …and here we are a few hours in, admiring the rather beautiful lake district, sun shining and the world seeming a rather wonderful place. 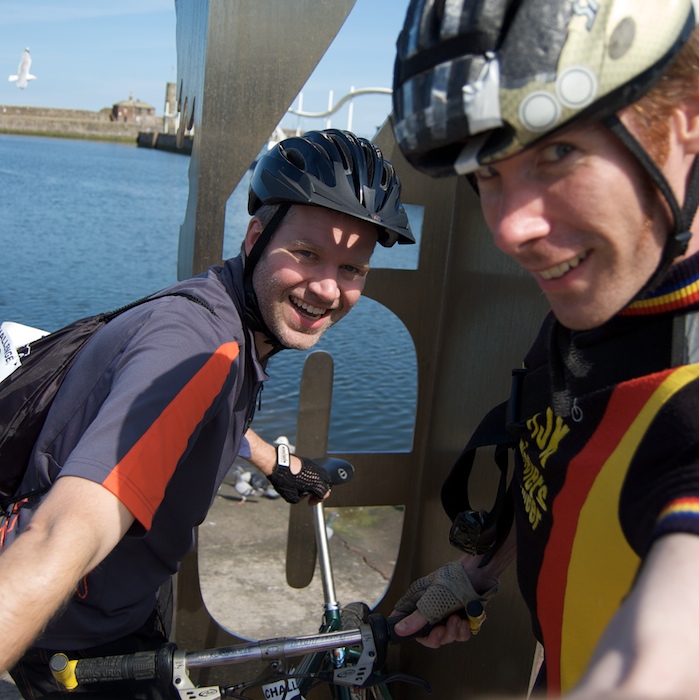 a fair few years back now, i cycled the C2C aka sea to sea aka coast to coast with loz, a friend from university times. i remembered enjoying it so much, i vowed to do such a thing at least each year. well, many years later, i still hadn’t, and at a geeky workshop met an american staying on the route of the C2C who said he had done a load of long distance rides. jump-cut to a few weeks later, and here we are at the beginning of the ride grinning inanely…