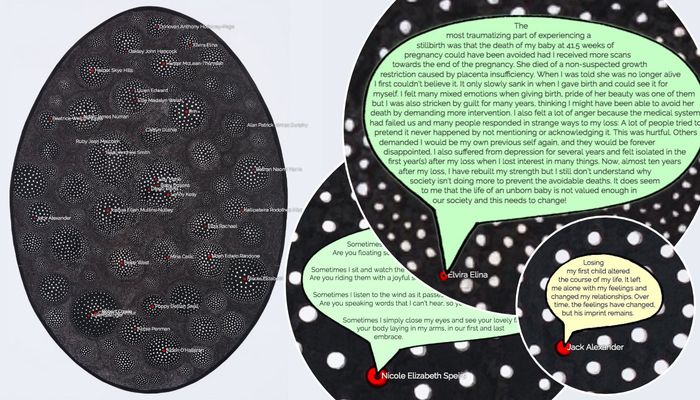 each egg a world, online

each egg a world online is live, and people are contributing. adinda writes –

I’m pleased to announce the Each Egg a World online artwork has gone live this month at: https://www.stillbornproject.org.uk/eacheggaworld/. Each Egg A World is a participatory project, which aims to share the stories of over 44,000 people worldwide who have been affected by stillbirth.

Information has been sent to stillbirth support groups around the world including the UK, Europe, US, Canada, South Africa, Australia and New Zealand to ask for their help in making people aware this resources now exists.

The artwork is based on a painting of the same name by artist Adinda van ’t Klooster, which contains 44,061 dots that together create patterns of human egg cells inside a larger egg shape. Each dot no matter how small represents a stillbirth and its story.

In the online artwork each dot gives the potential for a couple or a mother or father to select a dot and name it after their baby. They can then also contribute a brief anonymous description of their experience and the emotions involved. For someone who suffered a stillbirth many years ago, this story might show a way through the difficult emotions and finding a way to live despite the loss; for someone who had a recent stillbirth this story might focus on the difficult emotions encountered in the immediate aftermath of a stillbirth.

A named dot will turn red and once the statement has been reviewed it will be readable online when hovering over the named dot. Anybody, including people who have not directly experienced stillbirth, can view the statements and give feedback on the artwork.

It is hoped that the artwork will help to break the taboo on stillbirth and make people feel slightly better equipped with understanding when they come across a stillbirth in their own community.

The artwork also has a search function which allows the viewer to type in a word that they think might be one that will be repeatedly used (for example anger or sadness or love), and when they click the search icon all the dots where statements used this word will highlight. Once the artwork is more densely populated this will be a quick way to explore the range of emotions raised by a stillbirth.

There is also a countries/painting button on the top left of the interface. In painting mode the artwork is black and white, and in countries mode you can see visually represented from which countries we’ve received most contributions.

We’ve already had many people contributing and the feedback has been very positive sofar. Do have a look, and you can leave us feedback as well, also if you haven’t experienced a stillbirth yourself. You can do this by going here: https://www.stillbornproject.org.uk/eacheggaworld/info/feedback/

And last but not least, many thanks to all who have already contributed. It is together that we can beat the taboo on stillbirth. One participant worded this really well, she said: “People generally think that talking about stillbirth upsets the parents but actually, it is the opposite. By seeing that we need the acknowledgement of our loss may help break this belief.”

I hope this will become an important resource. Thanks to all the funders, to Toby Harrison for programming, to Alexander Heazell for believing in the project from the start and to SANDS for helping us reach our audiences.