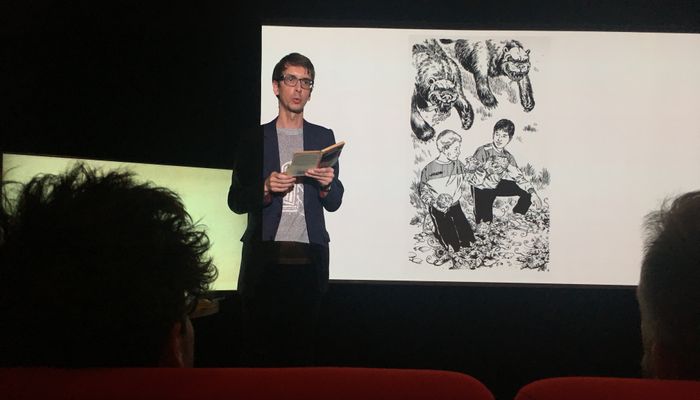 choose your own documentary

got into a sneak industry showing of choose your own documentary. it’s a bona-fide branching narrative, audience-interactive film. and it’s great.

it’s also so perfect a concept, it conjures the slightly uncomfortable thought that rather than than trailblazer for the field, it might just be the one-and-only definitive article. but, no. the conceit relies on such a limited demographic, to start. and… well, is it really an interactive film? my take is that it is simply good theatre, executed with the best audience-voting slide-deck ever. the protagonist-narrator on stage is key, emotionally and in terms of audience interaction.

...aaah. Well-conceived, well executed, and well answered on just what/who individuals in the audience are interacting with. https://t.co/xkha0oOYma

Plus, @cyodoc blew my mind by saying that people were actually recruiting their friends for future screenings so they could block vote to swing things one way or the other! #LiveCinemaDF

(for the record, stopping a film and voting individually is a bad idea for interactive film, breaks the spell and takes people away from each other... but it comes with the conceit for @cyodoc, and having the protagonist-compete to mediate makes all the difference) #LiveCinemaDF