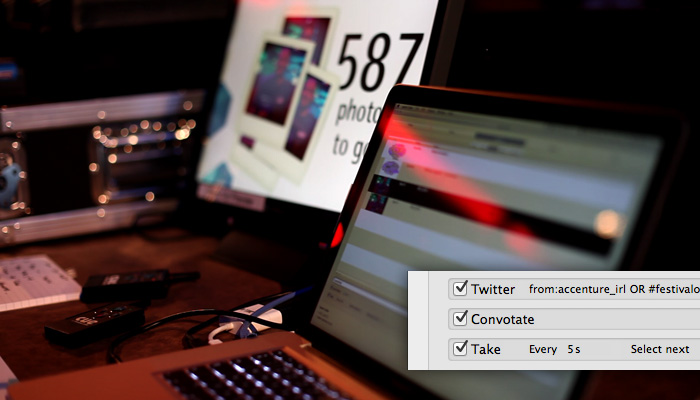 at the heart of the brain was the increasingly inappropriately named *spark titler, collating all the media and channelling it to the screen. it runs the screen, and gives just what you need to be responsive to the moment without breaking the visual illusion. so… *spark screenrunner?

whatever its grown-up name is, it monitored a fileshare for photos incoming from the caption-shot camera, illustrations and data-vis from ciaran and caroline’s laptops, listened to twitter accounts and hashtags, and, wonderfully, got updates in real-time from convotate, stef’s conversation annotation web-app. a technical shout-out here to pusher, the HTML5 websocket powered realtime messaging service, and to luke redpath’s objective-c library. and via the venue’s many-input HD vision mixer and a quartz composer patch or so more, we had treated feeds from above ciaran’s illustration pad, photoshop screen and whatnot.

it might be that you have to do this kind of job to grok the need, but i really think there’s something in *spark screenrunner, whether its just titling and transitioning between two presenters’ powerpoints or this kind of high-end craziness.