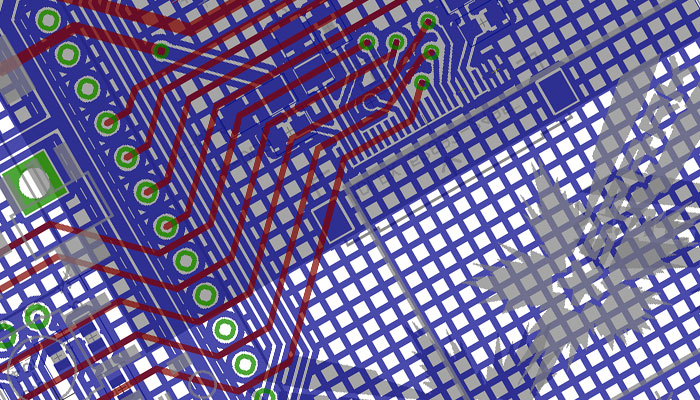 it’s been two and a half years since the magic week of going from idea to breaking a working dvi mixer package and the ensuing dreams of getting it out there for everybody. problem is, thats still in dream territory: where’s the manufacturable hardware or website buy-button?

by june 2010 there was a v1 and things were looking good. it had taken far longer than seemed necessary… but that turned out to be just the tip of the iceberg. this was a year ago, and this slightly less. so what has been happening? long story short, the software[1] had been waiting for hardware that was perpetually “almost” there. if you’re time-constrained, don’t work with someone else who is also time-constrained; doubly so if you’re entirely relying on them. if you don’t have the skills to make you the master of your own destiny, get on with getting them.

getting on with getting them, for the past two months i’ve been working away and what you see above is an extract from my first PCB design, a from-scratch reworking of what a d-fuser PCB needs to be. i’ve just sent it out to be manufactured and all-importantly assembled up (data sheets and making up eagle library parts may no longer scare me, but soldering 0.5mm pitch FFCs does). if it doesn’t work its because of the design, and that i can work with – and now have some guru backup.

all of which means it’s as if it’s may 2010 again: we’re in “pcbs, parts, plans” territory, complete with corresponding announcement: i will be presenting the work-in-progress at dorkbot london #78[2]. the difference is, this time i know the whole widget, its entirely down to me, and i’ve even secured a little start-up funding to expedite this prototyping.