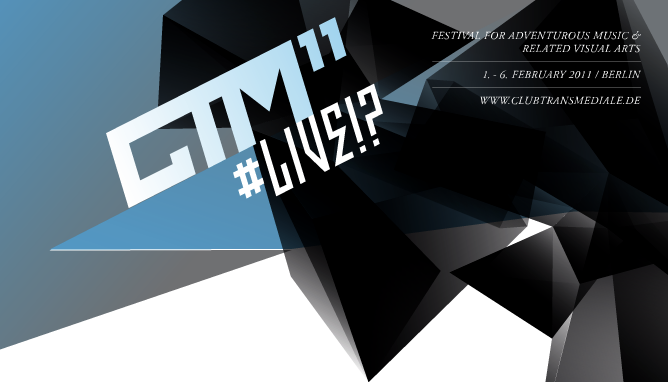 given my phd research centred around liveness and media based performance, off to berlin for the as-if-it-were-made-for-me symposium of club transmediale:

this year’s festival theme #live!? puts the spotlight on the practice of media-based audio/visual live performance. […] in considering what ‘liveness’ entails in the age of media technology, two major aspects may be identified: on the one hand, audiovisual recordings (and reproductions thereof) were what first made it possible to experience a “live” situation in an atemporal and non-site specific manner and, particulary in the context of mass media broadcasts, brought the term “live” into existence as a differentiator that had previously never been needed; and, on the other hand, media artists have experimented with the performative potential of technological media in live settings ever since these were invented, i.e. they tested the limits of film and records, video, tape and the computer. at the same time, the growth in interactive applications of media technologies has lead to new forms of socio-cultural participation and much discussed manifestations of augmented experience. the question as to whether, in terms of their aesthetic and everyday cultural impact certain media technologies are genuinely suited to “liveness” or to its diametric opposite seems to have not yet been conclusively answered.

having said this was made for me, there’s a lot of verbiage there, and i’m less interested in a lot of the thrust of it – the ‘what’ – and a lot more interested in the ‘why’ and ‘how could we’.