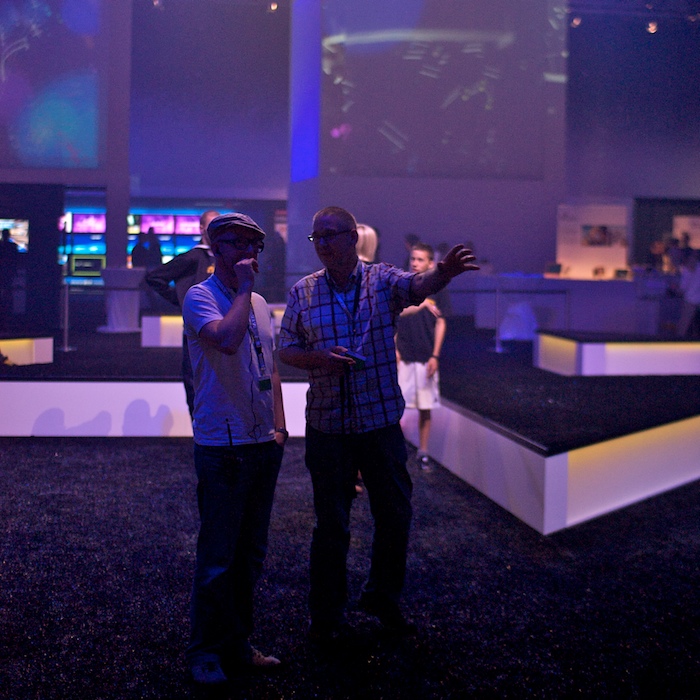 from pitch and the day-long meetings to kick it off, its now three months later and i’m actually in the sony stand at ifa 2009. a non-disclosure agreement, a 11,000x1080px canvas in after effects, 15 full-bore mac pros compositing their slice of the 400GB drive image full of particle layers and product prisms, eight screens pixelmapped in surround across the stand’s towers… its been one of those projects of scary statistics, corporate reputations riding on the line and knowing there is no preview, the not-yet-there architecture is the output monitor.

to take a step back, d-fuse won the commission to create the video environment that forms the centrepiece of the stand. having contributed to what in effect were a series of brand films last year, this year was the real thing: together with andy visser’s sound design, creating an audio-visual environment to give a… well, how to describe: something between an emotional journey and a feeling of space to the stand. i like freestate’s vision for the stand, almost as parkland with scattered mini-booths of products, rather than the products! products! products! you find elsewhere.

so its a nice moment to see have mike, mr d-fuse, and adam, mr freestate, in-situ and discussing the finer points of trade-show land with smiles, looking at a stand that pretty much nailed what was discussed those months ago.