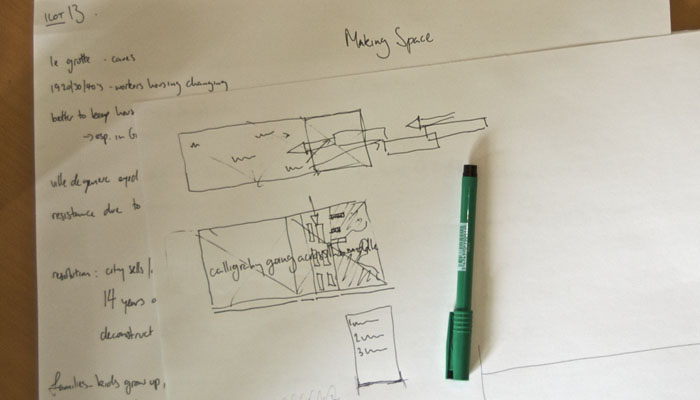 mapping'09 » kinetxt › the themes are set

one of the ideas of kinetxt is starting off from a blank sheet of paper, story unwritten, and the way I see it one way of increasing the quality or interest in the resultant performance is using the context of the performance as catalyst or reference for whatever emerges. so mapping gave us a great hand in programming us as an outdoor projection in the courtyard of îlot 13, a place with lots of history and spirit. we were projecting on the back walls of one of the blocks, which instantly gives ideas of x-ray views through to the people living there, and the whole complex is a kind of utopia, being a former squat that came to an agreement with the city council, and instead of the standard cycle of demolition and profiteering redevelopment seen world-over, an association was formed to develop the block in the interests of its inhabitants. and what a wonderful job they’ve done, it is quite the urban oasis, both smart and informal.

and so we met there, talked through the history, looked at the wall we were to project on, doodled themes we could explore and so on, captured a little by the photo above.