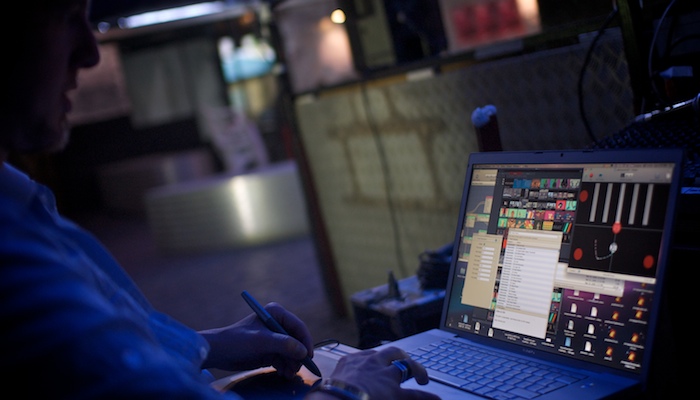 this was perhaps the most inspiring moment of lpm for me. to set the background, i’ve been planning a entirely new paradigm of vj interface for years now, have a subversion repository with a project to that end, and have had many discussions with people like anton about how flightdecks-of-buttons suck and where are we in our quests to make something better. the short answer is: years in, far from anything demonstrable due to the overhead of having to write such a thing from scratch.

enter david, who was kinda freaking out about a hip-hop gig he’d been asked to do, as he wasn’t sure how to get the scratch control and 'ting required. two hours later, he had a whole functioning gestural interface for vdmx using a tablet and the ultra-cool idea of tracing a line through a… er… control space along which pulsed the beat. a) genius b) rapid prototyped in two hours c) vdmx is cool because it can host qc, but the conceptual shift here is it works the other way round, a qc interface running in front of vdmx sending commands via open sound control.