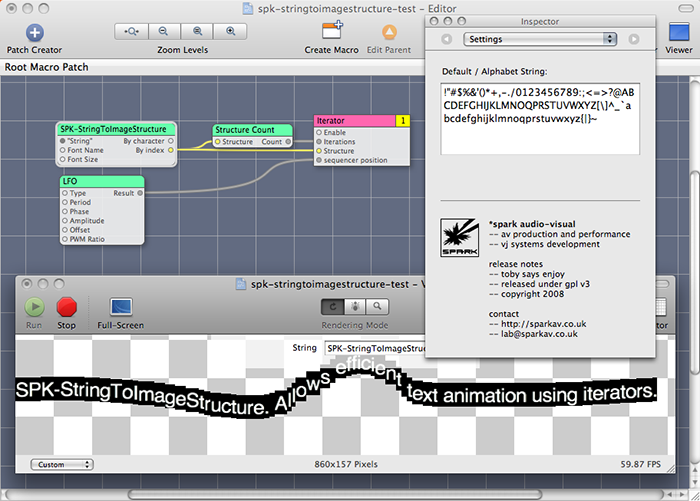 having worked through the hillegass cocoa book, its time to start putting that to good use. and project number one was always going to be one of the big glaring omissions in quartz composer to my mind: a means of animating a string on a per-character basis.

if you want to compete with after-effects, then you need to be able to produce the various type animations directors are used to, and you need to do so at a decent framerate. to animate say the entry of a character onto the screen, you would create the animation for one character and then iterate that operation along the string. the problem is, rendering each glyph inside the iterator is both massively expensive and massively redundant, but thats the only approach qc allows, hacks on the back of hacks apart. a much better approach would be to have a single patch that takes a string and produces a data glob of rendered characters and their sizing and spacing information, firing off just once at the beginning and feeding the result to the animation iterator: at which point you’re just moving sprites around and the gpu barely notices.

the patch is released under gplv3, and is attached below.

a massive shout to the kineme duo for leading the way with their custom plug-ins and general all-round heroic qualities. in particular their ‘structure tools’ patches were the enabler for those early text sequencing experiments.