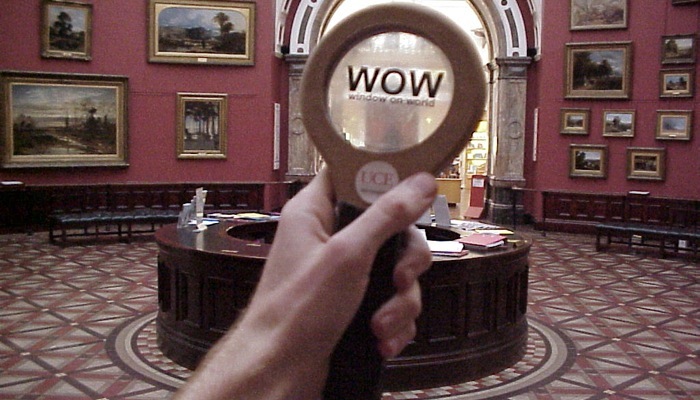 museums through the looking glass

i just posted up the piece on the museum robot, and have sat here since thinking it doesn’t even touch on why this stuff is so cool, and also why the hell did they choose a robot? and a red cylinder at that? i don’t think i can get much further without railing against their implementation, but then they’re not product designers, eh, and they certainly didn’t go through the magic process with jack ingram and the others. to paraphrase our outcome, you want to allow each visitor to have a parrot on their shoulder that interprets the museum for the visitor as they journey through it, and add to that a magic magnifying glass so they can layer the audio description into the physical space - it really leverage the power of an audio description. you’d think you want to put all-singing, all-dancing multimedia extravaganzas around every exhibit, but that proved not the way by a long shot. in that, the researchers got it right by having a guide that goes round with the visitors, and that uses speech to communicate the interest.
so whats cool about the robot, is that it contains the realisation of the italian’s research into gelling hyperspace and the physical world into an appropriate, human narration. it has an understanding of what you’re looking at, it has a growing understanding of you, and it can put two and two together to not only describe what you’re seeing, but describe it in terms of what you’ve seen, and give you some options as to where to go next based on all that. its amazing what you can infer, say you dwell on painter x, but pass by painter y - such a system can then cross reference the two find some trends, and use that to guide its future interpretation of the museum exhibits. and its always following you and your impulses, not imposing a predefined experience.
in short, its all about cutting it down to an intelligent narration, and then giving that narration a tool so it can interact with the physical space, a spotlight in effect. and who would have thought that in our increasingly media bombarded environment.

i also realised the website of my project had gone off-line for a while, so i’ve put it back. if you’ve got this far, you should check it out. there’s an animation following a visitor to the museum, thats a good place to start - green box / ‘system’